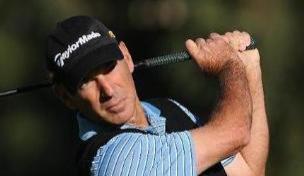 Getty Images
PACIFIC PALISADES, CA - FEBRUARY 17: Corey Pavin plays his tee shot on the second hole during the first round of the Northern Trust Open at Riviera Country Club on February 17, 2011 in Pacific Palisades, California. (Photo by Stuart Franklin/Getty Images)  -

Pavin earned his first Champions Tour win on Sunday in the Allianz Championship. He began by joking that his left-handed chip shot from a pothole was “just another shot.” It was definitely a calculated risk and he had no idea how it was going to turn out. It was very fortunate that the shot ended up as well as it did.

Regarding the question of anchoring the putter, he said that he is not a big fan of those putters and the decision was made long ago to make them legal. If he had his way, anchored putters would not be legal and would not be in play but he is not in the position to make such a decision.

If he could say something to a young golfer who was not 6 foot 3 inches tall and not a long hitter, he would tell them that in golf there are all kinds of way to get the ball in the hole. He has had to make up for his lack of distance by improving his game with his approach clubs and his short game. He has always tried to play within his own ability and not try to force anything. It is not about how you get the ball in the hole, it is about getting the ball in the hole and the best way to do that in his opinion is to be himself by playing his own game.

He had worked with his late teacher Bruce Hamilton since the time he was 15 years old and he even got emotional talking about him on the program. Hamilton made a valiant effort in a fight against cancer that he would ultimately lose and it was difficult to watch him struggle. He had desperately wanted to win one more time while Hamilton was still alive and it was an amazing thing to learn that at the moment he hit the chip shot at 14, a bench was being dedicated to his former teacher. He is sure that Bruce is up there smiling down.