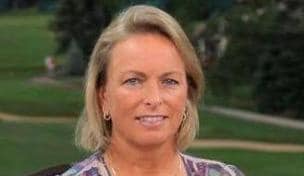 Getty Images
MEMPHIS, TN - JUNE 13: Brian Gay of the United States reads his birdie putt on the 13th green during the third round of the St. Jude Classic at TPC Southwind held on June 13, 2009 in Memphis, Tennessee. (Photo by Michael Cohen/Getty Images)  -

Dottie Pepper is a Golf Channel on NBC analyst and is also the co-author of a children’s book series called “Bogey Tees Off.” Meg Mallon was named Captain of the U.S. Solheim Cup team and made some very nice comments about Pepper in her speech at the PGA Merchandise Show. She was unaware of the comments and having known Mallon for many years, she knows how good of a person she is and Pepper is really blown away by all of this.

The passion that she has for the Solheim Cup started with her experience in the Curtis Cup. The Curtis Cup was a big part of her amateur life and she really appreciated the opportunity that the Solheim Cup provided to play a great and spirited match play competition.

When it comes to the question of one day being a U.S. Solheim Cup captain, she has held off on thinking about such a thing for a number of years but when she discussed it with her husband, she got very emotional about it. It would be an honor to be asked to be an Assistant Captain for the U.S. Solheim Cup team but she wants to wait until she is actually asked before she speculates about the experience.

The “Bogey Tees Off” project came to her attention through a friend of hers who thought that she would be interested in participating. It started as a screenplay and she has really enjoyed being a part of the creative process to turn this into a series of books. Bogey is a range ball who does not want to be a range ball for his entire life and in fact wants to be a professional golfer. Bogey takes a journey where he learns a lot about himself and finds out that you do not have to be perfect to have ambitions and dreams.

In her opinion, the most captivating stories in 2012 will include Phil Mickelson and how he responds to his slow start this year, what will happen with the Ryder Cup at Medinah, how Olympic Club has changed since 1998 for this year’s U.S. Open, and also the LPGA Tour schedule for 2012 which is not perfect but is a great improvement for which Michael Whan deserves a great deal of credit.