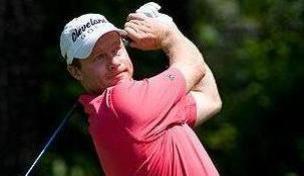 Getty Images
SHENZHEN, CHINA - NOVEMBER 26: Miguel Angel Jimenez of Spain looks on during the Pro - Am of the Omega Mission Hills World Cup at the Mission Hills Resort on November 26, 2008 in Shenzhen, China. (Photo by Ian Walton/Getty Images)  -

40-year-old Gary Christian will be making his PGA TOUR debut this year after finishing 9th on the Nationwide Tour Money List. In response to all of the jokes he has been getting, he has come up with the title of “40-year-old PGA TOUR virgin” complete with plenty of references to the Steve Carell movie.

The Nationwide Tour Championship was a wonderful week where he clinched his card in the presence of his family and a number of friends. The holidays were very enjoyable as he was able to relax knowing where he was going to play in 2012. He will be heading out to Hawaii a little early for the Sony Open and he will be pretty wide-eyed about making his debut. Having some extra time over there will allow him to relax and then be ready to go for Thursday’s first round.

His biggest thrill in golf has been overcoming mental obstacles and making his PGA TOUR debut is a new obstacle. He is excited about the challenge and knows that he needs to be and is strong enough to realize that a shot is a shot no matter what tournament it is and he is comforted by having the support of loved ones as he embarks on his first PGA TOUR season.

Over the last couple of weeks, he has spoken a few times with Roland Thatcher who has been on the PGA TOUR for a number of years and has received some very valuable advice. He wants to play practice rounds with and eat lunch with some veteran players on the PGA TOUR this year because he knows that he will meet a lot of interesting people and learn a lot of valuable lessons from people who have been out on the PGA TOUR for a long time.