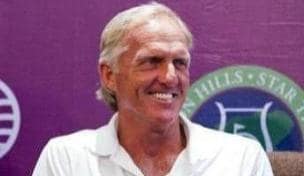 Norman is making his first Humana Challenge appearance since 1986 next week. Several months ago, he spoke with his friend Bill Clinton about the former President’s possible involvement and then when Clinton came on board, they spoke again and Norman of course said yes to the invitation to play the event out in Palm Springs, CA. It has a lot of great history and it is in a great location. He thinks Bill Clinton will do some great things for that event. He told the former President that if he is at the Humana Challenge, he will be there as well. As far as he knows, he will be playing with Clinton in the final day of the pro-am portion on Saturday of tournament week.

On the question of the need for an offseason, Norman said that he feels that there is an offseason in terms of the PGA TOUR but worldwide golfers are independent contractors and people have the opportunity to win additional events and earn additional money around the world when the PGA TOUR ends for the year. There has been a world tour for many years and he is very happy to see the LPGA Tour extend its tour into Australia beginning in 2012. There may not be a finish line to the year but the fact that golf is almost always being played helps everyone involved in golf.

Next month, he is playing in the Mayakoba Golf Classic on the PGA TOUR which is held on a course that Norman designed. Mexico has done a fantastic job of promoting the game of golf in terms of Mexican citizens taking up the game as well as encouraging international tourism to the area. The idea to bring a PGA TOUR event to Mexico has been a success and next year it will not be an opposite field event against the WGC-Accenture Match Play but instead it will stand alone and have its own week.