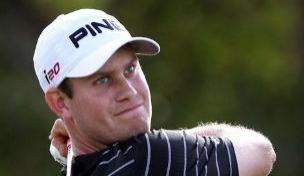 Getty Images
LOUISVILLE, KY - SEPTEMBER 20: Kenny Perry of the USA team lines up a putt during the afternoon four-ball matches on day two of the 2008 Ryder Cup at Valhalla Golf Club on September 20, 2008 in Louisville, Kentucky. (Photo by Sam Greenwood/Getty Images)  -

After 5 starts as a PGA TOUR rookie, he is overall very happy with his progress on the PGA TOUR. He had never seen any of the courses in his first five starts and the fact that he made the cut on all five courses was definitely an accomplishment. He is now looking over all of his stats to see what he is doing right and what he is doing wrong and will then try to figure out how he can get better.

His best experience so far has been the Waste Management Phoenix Open. He was fortunate enough to receive a Sponsor’s Exemption and everyone there was so excited and so nice and the atmosphere was very intense and not unlike the yearly Georgia-Florida football game.

Rutabaga is his favorite food according to the PGA TOUR Media Guide and growing up in the south, he went to Farmer’s Markets and got to try a number of interesting vegetables and that one just happens to be his favorite.

Based on his positive placement in the PGA TOUR reshuffle, he is taking a look at his schedule to see which ones he wants to add. He has played well to start the year but he is a bit tired so he is trying to figure out the best way to take advantage of his standing but not burn himself out. He is looking forward to the Honda Classic in two weeks.

The player his age that impresses him the most is his former Georgia teammate and roommate Hudson Swafford who is extremely talented and one of the players that he cannot beat on the golf course. English would not be surprised to see Swafford win three times on the Nationwide Tour and earn a performance promotion to the PGA TOUR.

He prefers renting houses to staying in hotel rooms when he is out on the road on the PGA TOUR. When he played in Q-School, he and former Georgia teammate Brian Harman rented a house together and they both earned their PGA TOUR cards. English prefers houses because they are more private and offer more amenities.