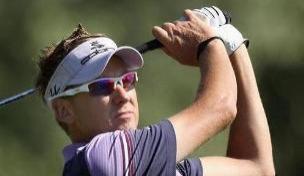 Holly Sonders interviewed Ian Poulter at the launch of his new deal with Puma to wear their shoes and belts. Poulter is very excited about this new deal and it will involve wearing different shoes in 2012 that he feels are very comfortable and look great.

When it comes  to his schedule, he and his wife are expecting a baby in two weeks and after some time off following the birth, Ian will begin his 2012 tournament schedule. There will be a couple of changes to his schedule this year. For instance, he may not be able to play the Desert Swing on the European Tour so he will play more West Coast events on the PGA  TOUR.

Looking ahead to  the Ryder Cup this year, he felt very encouraged ending his 2011 season with a win in Australia and he is looking forward to playing his very best to give himself the best odds to be a part of the European team. Foursomes, or alternate shot, is his favorite Ryder Cup format because it is so different from how people play most of the time.

His main goal in 2012 is to win a Major and he knows that he has not played well enough in past years in those events and because of his desire to win a Major, that will be a huge focus in his 2012 season.