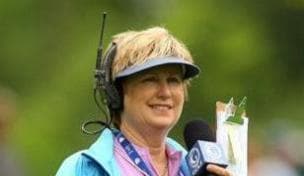 Getty Images
CLIFTON, NJ - MAY 18: Nina Reis of Sweden wears winter gloves as she walks to the 7th tee during the second round of the LPGA Sybase Classic at Upper Montclair Country Club on May 18, 2007 in Clifton, New Jersey. (Photo by Hunter Martin/Getty Images)  -

LPGA Tour Analyst Jane Crafter is in Australia this week for the ISPS Handa Women’s Australian Open which is the Season Premiere event of the 2012 LPGA Tour. Jessica Korda, whose father Petr won the Australian Open in professional tennis, enters the final round with the lead and it would be quite a story if Jessica won and was able to emulate her father in a National Open in Australia. There were tough conditions in the third round as winds were up to 25 miles per hour and there was also the occasional storm.

Playing at Royal Melbourne this week is analogous to when the RICOH Women’s British Open was played at St. Andrews for the first time in terms of excitement. As a native Australian, she takes a lot of pride in the fact that the Women’s National Open is at this Alister Mackenzie classic.

The tournament organizers have done a great job in terms of course setup and tee positioning and while it is playing U.S. Open difficult this week, almost all of the players are praising this week’s event in terms of the course, the hospitality, and the excitement.

Earlier this week, a patron shouted to Karrie Webb to not hit a putt because she would have been violating a rule which would have cost her two strokes. Crafter thinks it is great that the patron did that because if people can call in violations from their couch, patrons who are on the course watching the tournament should be able to yell out if they see a player who is about to commit a rules violation.

While Korda is leading the tournament, World #1 Yani Tseng is just two shots back and whenever the World #1 is in contention, everyone else feels a little bit more nervous in the final round. Tseng has had a good week but not a great week. While she has hit a lot of great shots she has also hit a lot of bad shots and if anything else, she has been a bit too inconsistent at Royal Melbourne this week but you can never count Tseng out in the final round which will be very exciting.