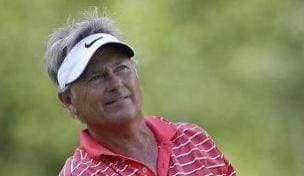 Getty Images
during the final round of the Montreal Championship presented by Desjardins held at Club de Golf Fontainebleau on July 3, 2011 in Montreal, Canada.  -

John Cook is an 8-time Champions Tour winner who was an Assistant Captain for the winning U.S. Presidents Cup Team in 2011. He is the defending champion at next week’s Mitsubishi Electric Championship on the Champions Tour. Last year, his goal was a Major and did not get it done although he did get into a playoff with Fred Couples at the Senior Players Championship. His goals are the same for 2012 and while he had a lot of great weeks in 2011, he wants to be more consistent this year especially in the Majors. He would like to have a chance to win every time he tees it up and if he is able to be competitive, he thinks he will have a chance in at least one Major.

In his role as Assistant Captain, he was able to spend a lot of time around a number of younger players who he did not know very well prior to going to Australia. The young players blew him away with their single-minded focus to win and their desire to learn from the veterans like himself, Jay Haas, and Fred Couples. Everyone put their best effort forward and everyone stepped it up with the goal to win and they were able to achieve that goal. Egos were put aside in favor of the team and it was inspiring to be a part of it.

When he watched Tiger Woods at the Presidents Cup, he saw someone who was not only really happy all week long, but also someone who was playing incredibly well. He had been watching Tiger take small steps for a long time but by the time he got to Australia, the ball striking was back in his game and even the sound of his golf shots were back. Tiger was trusting his golf swing again and Cook is anxious to see how a happy and healthy Tiger Woods performs in 2012. You can say what you want about him, but he is so important to the game of golf and he has all of the skills needed to return to the level of dominance that he once enjoyed.

Anything that you can do to put momentum into an event that really needs it is important and Bill Clinton has been able to do exactly that with the Humana Challenge. The old Bob Hope Classic gave Cook one of his first sponsor’s exemptions and ever since he played as often as he could. While he is sad to see the event change in a number of ways, he is rooting for the Humana Challenge and he wants to see everyone involved succeed.

The Champions Tour is very strong and having the return of players like Tom Lehman, Mark Calcavecchia, and a healthy Bernhard Langer is going to be great for 2012. There are so many talented players who can really perform on the course that every week is exciting and he is very happy just to be a part of the Champions Tour week in and week out. He is very much looking forward to getting to Hawaii to defend his title in the 2012 season opener.