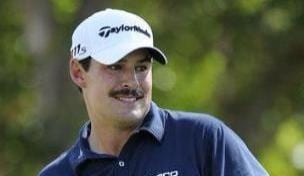 Getty Images
CHARLOTTE, NC - APRIL 30: Tiger Woods of the USA lines up a putt on the 6th green during the first round of the Quail Hollow Championship at Quail Hollow Golf Club on April 30, 2009 in Charlotte, North Carolina. (Photo by Richard Heathcote/Getty Images)  -

Johnson Wagner earned his 3rd career PGA TOUR win last week in the Sony Open in Hawaii. Wagner began by joking that his mustache, which is nameless and will not have a name although he is enjoying all of the suggestions, gets up about 30 minutes before he does. He and his wife have been joking about the mustache and his wife has gotten their son to ask him to shave it off. He enjoys being compared with Tom Selleck and added that maybe in a year, his mustache will be thick enough to truly be compared to Selleck's.

During the offseason, he worked very hard with his golf coach and in all the years he has played he had never had such a good preseason prep with his coach. He does not mean to sound arrogant but he has never had so much confidence in his game. A large part of his confidence comes from his improved athletic regiment. Last year, he and his caddie were talking about how to get better and Johnson knew that he was going to have to get into better shape to get to the next level. As a result, Johnson went out and hired a personal trainer right away. At most, he has weighed around 250 but right now he weighs closer to 225-230 thanks to working out and losing fat while gaining muscle.

His ultimate goal for 2012 is to qualify for the U.S. Ryder Cup team. He is very proud to be an American and it would be a dream come true to represent his country. With the Humana Challenge this week, he is playing an event that includes the close involvement of President Bill Clinton. He has not been briefed on any special protocol at the event but he has been to the White House before to see former President George W. Bush so he has been around a President and understands some of what it involves.

With his win, he is qualified for events like The Masters, WGC-Bridgestone Invitational, and the PGA Championship and while he may rethink his schedule a little, he does not think that he will change too many things this year.

Matt Every is a great guy and he has gotten to know him pretty well out on tour. He is very happy to see him back on the PGA TOUR and he feels that it is unfortunate that Every’s comments were received the way they were. Every will learn from this experience and he looks forward to seeing him continue to play well.

He is excited about the new format of the Humana Challenge and plans to celebrate his win next week when he takes the week of the Farmers Insurance Open off. When he won the Shell Houston Open, he went straight to The Masters in Augusta so instead of celebrating, he was trying to everything organized to play in the year’s first Major so he really wants to enjoy the celebration of this Sony Open win.