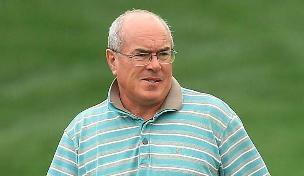 Getty Images
DOHA, QATAR - JANUARY 31: Brett Rumford of Australia on the par four 4th hole during the final round of The Commercialbank Qatar Masters at The Doha Golf Club on January 31, 2010 in Doha, Qatar. (Photo by Ross Kinnaird/Getty Images)  -

Julian Tutt is a European Tour analyst who is in Dubai this week for the Omega Dubai Desert Classic. Rory McIlroy opened with a 66 in the first round and with the way he is playing around the world, the expectation among players and media members alike is that he is a favorite to win no matter where he tees it up. He got off to a slow start but closed with a flourish and it was possible that he could have gone even lower on Thursday. McIlroy is the man to beat this week.

Alvaro Quiros, who has won each of the last two events in Dubai, opened with a 70 and Quiros has admitted that he is not playing well right now. Because the course is in such great shape and is welcoming to long hitters, it is still possible for Quiros to come from behind if he is able to get hot. Quiros is not out of it yet but he needs to play very well over the next three days to have a chance to win.

The European Tour players love seeing many of the world’s best playing in the Desert Swing and other events because it gives the European Tour a lot more attention and a lot more press. The players do not mind that they receive appearance fees to join the field and it is exciting to have big names added to tournaments.

The longer putter is starting to get a lot more credibility as a serious option to use on the greens by players of all ages. While there has not been much reaction to Tiger’s comments just as there would not be much reaction to any player’s comments on this issue, there will be if the USGA and R&A decide to act.