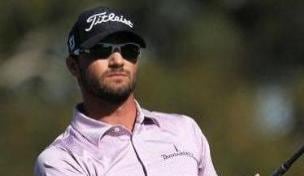 Getty Images
LA JOLLA, CA - JANUARY 29: Kyle Stanley watches his tee shot on the second hole during the final round of the Farmers Insurance Open on the South Course of the Torrey Pines Golf Course on January 29, 2012 in La Jolla, California. (Photo by Stephen Dunn/Getty Images)  -

One week after losing the Farmers Insurance Open when he entered the final round with a 5 shot lead, Stanley won the Waste Management Phoenix Open by coming from 8 shots back in the final round. On the Sunday after the Farmers Insurance Open, he found out after the round that there was actually a winner’s check prepared with his name that had to be discarded. It was tough to see but he loved the fact that the winner’s check in Scottsdale was a bit bigger.

He got so many phone messages, text messages, and twitter messages after he lost the Farmers Insurance Open and that helped him a great deal to get through the emotions of what happened. Some notable messages included the head coach at Gonzaga and Steve Stricker and those were particularly meaningful to him.

On Wednesday in Scottsdale he played a practice round at Whisper Rock with Phil Mickelson. The best advice he received was to keep playing your game no matter where he was on the leaderboard. At Torrey Pines he went from being aggressive to trying to protect his lead and that played a big role in losing the tournament.

It was an amazing feeling to watch that final putt for par go in at 18 at TPC Scottsdale and that is probably the greatest feeling of his life up to this point. Stanley felt that it was a bit easier to play the final round trying to come from behind than trying to protect a lead. He did not think about winning too much and was just trying to hit as many good shots as he could. His caddie Brett Waldman was invaluable to him during that final round.

On the 17th hole in the final round, he found his second shot underneath some cactus and when he and Brett approached the ball, they doubted that he could reach the green on his second at first. Brett gave him the sand wedge which lofted the ball higher and after he hit it, it actually spun left which put him closer to the hole. He does not practice that shot too much and he was only hoping to get within 40 feet and obviously he did much better than that.

After what he experienced at Torrey Pines, he feels especially bad for Spencer Levin and he would advise Levin to focus on the positives from last week and to have a short memory of the negatives so you can learn some lessons and move forward.

His schedule has changed a bit thanks to this win because he is now in a couple of Majors and in the WGC-Accenture Match Play. He played around 31 times in 2011 and does not anticipate playing that many times in 2012.