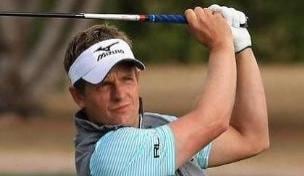 World #1 and 2011 PGA TOUR Player of the Year Luke Donald is making his 2012 PGA TOUR debut this week in the Northern Trust Open. He won the 2011 WGC-Accenture Match Play and was not a #1 seed and he became more and more comfortable as the week on because he was able to get through his early matches pretty easily and by the final match, he was feeling very, very good about his game when he went on to beat Martin Kaymer.

When it comes to who he would like to beat, Luke said that there were a number of people he would love to meet face-to-face and take down and he mentioned Sergio Garcia and Rory McIlroy specifically.

His mindset in Match Play is to not give holes away by making mistakes. He has a very consistent game where he does not make a lot of bogeys. The best thing he can do is force his opponents to make a lot of birdies and if they do and go on to win, he will have a lot of respect for their performance although he certainly would not like losing.

While he does not want to give away too many Match Play secrets, he said that he likes to avoid talking a lot during his matches but the best strategy is to keep hitting iron shots close to the pin which would make birdies easier to obtain and force opponents to top him.

He is very excited that Conway Farms near Chicago will be the host of the 2013 BMW Championship. He plays a lot of golf at Conway Farms when he is living in Chicago and it is a great course that has hosted an NCAA Championship and is currently having some work done to make it an even better course by 2013.

He is hoping that during the Ryder Cup which is at Medinah near Chicago that he and the other guys will be able a good local celebration although he would not be in charge of that. It will be a busy week for everyone but he is certainly hoping for a big celebration at the end of the week.

When he practices, he likes to hit a set number of balls. The number he uses often is 65 where he will hit five balls each with 13 different clubs. It is a meticulous routine but it gives him a lot of confidence when he knows that he has had a balanced practice routine.

As World #1, he is aware of who is behind him and how close they are and when you are in this position, you definitely check the numbers. He likes to check for fun a lot of the time and right now he is looking at the list to see potential Match Play opponents for next week.

The events of the past few weeks prove how talented the players on the PGA TOUR really are and it also shows that no lead is safe no matter how big it is. The past few weeks have certainly been very exciting.

When choosing between 40 wins and 4 Major wins, he said that it would be tough to choose which one was the more impressive. If he had to choose, he would pick the 4 Major wins although 40 PGA TOUR wins is a big deal as well and both represent proof of how talented and successful someone is.