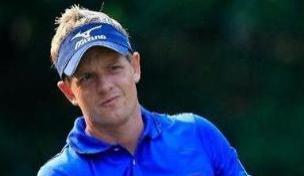 Getty Images
PONTE VEDRA BEACH, FL - MAY 11: Luke Donald of England hits a tee shot during a practice round prior to the start of THE PLAYERS Championship held at THE PLAYERS Stadium course at TPC Sawgrass on May 11, 2011 in Ponte Vedra Beach, Florida. (Photo by Sam Greenwood/Getty Images)  -

Luke Donald made a surprise visit to Morning Drive on Tuesday morning. He is receiving the Vardon Trophy and the PGA of America Player of the Year awards today from the PGA of America for his 2011 performance. In his opinion, 2011 was an amazing year but the thing that he was most proud of was winning both the PGA TOUR and European Tour Money titles. He is happy to see Lee Westwood and Rory McIlroy join the PGA TOUR to try to pull off the same feat in 2012.

He went into the 2011 Children’s Miracle Network Hospitals Classic knowing that winning was the only option and that actually made him more relaxed because he knew exactly what he had to do and it was amazing to actually pull off the feat.

If there is one thing that he needs to improve in 2012, it is his driving. He improved in that area in 2011 but there is more work to do. His short game is his strength but he feels that if he can drive it better off the tee, he will be even better this year.

Looking ahead to the Majors, he does not think he has to change his focus or his plan but instead he needs to become more consistent in every area of his game and he hopes that if he improves the small things, it will lead to a big win in a Major.

Looking back on who helped along the way, he said that his family including his parents, wife, and children have provided a solid foundation in his life and in golf, his swing coach and his strength coach are the people who made 2011 possible in his opinion.