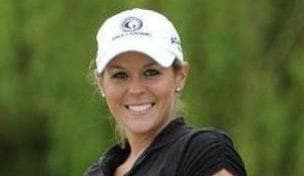 Mallory Blackwelder was a contestant on Big Break Ireland and is playing on the Symetra Tour in 2012. She is hoping to get a Sponsor’s Exemption to or Monday qualify for the RR Donnelley Founders Cup on the LPGA Tour and will begin her Symetra Tour season soon.

When it comes to going to college or turning pro early, it is up to the individual. She felt that going to college was the right thing for her personally and added that it is remarkable to see players like Jessica Korda and Lexi Thompson play so well at such a young age when they turned pro instead of going to college.

She has played golf a few times with Jessica Korda and is incredibly proud of what she accomplished in the Women’s Australian Open. Lexi Thompson is the exception not the rule because of her talent and for that reason, she had no business going to college anyway. She is also very impressed at what Michelle Wie has accomplished at such a young age and then going to Stanford University.

When it comes to the final round pairing of Tiger and Phil at Pebble Beach, she is rooting for Phil because she is a big fan of his but this pairing is great for golf and great for everyone involved.

One thing she learned when she was on The Big Break was to keep grinding and stay patient because literally anything can happen in golf and you have to be ready for both the good and the bad. Her goal on the Symetra Tour this year is to earn one of the ten LPGA Tour cards offered for 2013 and she is very happy that all 10 cards offer equal LPGA Tour status for next year.