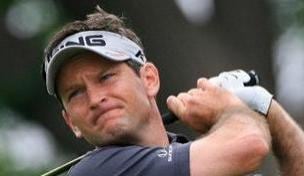 Getty Images
A scoreboard warns spectators of bad weather during the first round of the TOUR Championship at East Lake Golf Club on September 13, 2007 in Atlanta, Georgia. PGA TOUR - 2007 THE TOUR Championship presented by Coca-Cola - First RoundPhoto by Streeter Lecka/WireImage.com  -

Wilson won the Humana Challenge on Sunday for his 5th career PGA TOUR win and his third in the last 12 months to go with wins in the 2011 Sony Open in Hawaii and 2011 Waste Management Phoenix Open. It almost did not happen on Sunday because following the weather delay on Saturday, play went late into the afternoon and he made the winning putt in near darkness.

During the Humana Challenge, the pins were set up easier than usual because of the amateurs and as a result he had the mindset of trying to make as many birdies as possible and he was still amazed to see scores as low as they were.

Unlike in past years, he no longer gets mad at himself if he is playing with someone like Robert Garrigus who can drive it 40 yards past him. He just plays his own game and uses the clubs that he needs to use in order to get the ball in the hole in fewer strokes than anyone else. Being himself on the course has made a big difference in his level of success.

He has been working with Bob Rotella since 2006 and he has learned to love being in the process and being a part of the process. The process involves a lot of stress and a lot of nerves and he has been able to learn to enjoy that feeling of nervousness. Another piece of advice is to remember all of the good things that he does on the golf course in order to forget about any of the bad things that he may do.

Because he lives in Chicago and the Ryder Cup is there at Medinah, his motto for 2012 is “Ryder Cup or bust.” In the past he has spent a lot of time looking at the points lists and trying to figure out how to make the team. This year, he knows that if he can play well and enjoy the process he will put himself in position to make the team.

Since the birth of his son in 2007, Wilson does not practice that much during the offseason when he is in cold Chicago and in that sense he is very similar to fellow 2012 TOUR winner Steve Stricker who lives in Wisconsin. This year, however, he was very eager to try some new PING equipment and during this winter he made a couple of trips down to Phoenix in order to get the equipment right so he could be comfortable with them on the course and as seen by his win he has gotten off to good start.

He has been out on the PGA TOUR for a long time and he needed a decade for his first top 3 finish and Wilson thinks that the difference between then and the last five years is the fact that he is more comfortable with himself and his game and as a result he is more comfortable on the course. That increased comfort has resulted in more confidence and more success on the golf course and in his life.