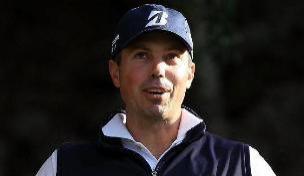 Kuchar is currently 11th in the Official World Golf Ranking and is making his 2012 worldwide debut this week in the Humana Challenge. When asked about how he would grade his 2011 season, he began by saying that it was always going to be a daunting task to follow up such an amazing 2010 season. 2011 was definitely a good year but he went into the year trying to prove that 2010 was a not a fluke. A new goal for 2012 is to win multiple times because he has yet to do that in his career.

He plays all over the world during the year now and he does not yet have a grasp on creating balance amidst a busy, globetrotting schedule. He has played in the Ryder Cup and the Presidents Cup overseas so he is looking forward to the opportunity to try to qualify for the U.S. Ryder Cup team at Medinah in the United States. It is an art to be able to play consistently while travelling a great deal and while Tiger and Phil seem to have figured it out, he would like to figure it out too.

It was a very exciting thing to be able to earn a place on the U.S. Presidents Cup team in Australia. He had hoped for many years to be able to take his parents and other members of his family to places like Australia and New Zealand and playing in the Presidents Cup provided that opportunity. Every place that he and his family travelled to in that region of the world for those two weeks was amazing and after the Presidents Cup, he and his wife met up with Gary Woodland and his girlfriend to spend time in China for the World Cup. He had really wanted to be a part of the World Cup and he was glad to be able to be a part of it and getting to win the World Cup was incredible.

After the World Cup, Gary Woodland signed with Excel Sports which also represents Kuchar. He said that he did talk with Gary about it a little bit but he did not do a hard sell to him. Excel Sports with Mark Steinberg has the feel of an intimate agency and a small team but yet has the global reach and global power of a larger sports firm. Excel has been wonderful and he has been able to recently sign a new deal with Grey Goose to go with his deals with Bridgestone, NetJets, and RBC.

When asked about Matt Every’s comments last week, he said that it was unfortunate that it became the big story that it did. He only heard about the comments second hand and he thinks that Every has had the chance to become a better person over the last year and he wants all players to have the same opportunity. But when comments like those are made it hurts everyone involved because the players are incredibly lucky to play a great game of golf where they are able to earn a lot of money and win great tournaments while supporting numerous charities at the same time.

He is looking forward to playing an event where he has been -52 over the last two years. He would love to start his 2012 with a win in the Humana Challenge and he is excited to see the changes that have been made to  the event in the last year as well as the impact of former President Clinton and his foundation.