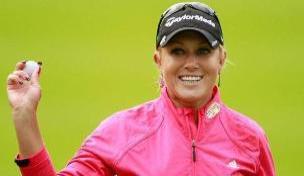 Getty Images
MALLORCA, SPAIN - MAY 15: Daniel Vancsik of Argentina plays his tee shot on the sixth hole during the third round of the Open Cala Millor Mallorca at Pula golf club on May 15, 2010 in Mallorca, Spain. (Photo by Stuart Franklin/Getty Images)  -

Meg Mallon was named the Captain of the 2013 U.S. Solheim Cup team. Natalie, who called her “Mother Meg” in 2009, was thrilled at the news because she admires Mallon so much and could not be more excited for her. Mallon was a great teammate and a great assistant captain on the U.S. Solheim Cup team. She is very passionate and very thoughtful about the history and tradition of the Solheim Cup and she cares a great deal about everyone involved. She will be a great Captain.

The Captain has a lot of obligations not only during the week of the Solheim Cup but also during the months prior to the event. She puts together statistics and game plans and she is trying to build a strong team atmosphere at the same time. Many people have no idea how many responsibilities a Captain has and watching a Captain do her job is amazing.

She has played in 3 Solheim Cups and those were the best three weeks of her career. It is wonderful to play with the best players in the world as teammates instead of opponents for that week. It is a yearlong process and everything about it is worth it and something very special.

She is town for the PGA Merchandise Show and she has checked out the Winn Grips area and will check out the TaylorMade and Adidas areas. She will also visit with her coach Butch Harmon at the Orange County Convention Center and will play some golf later today as well. It is exciting to be able to go around the Show and see all kinds of new products and gadgets that are available to look at and in some cases test out. Everyone is excited about professional golf and the game of golf at the PGA Merchandise Show.

She will not be playing in Australia because of a prior business commitment but she will be in the field for the events in Thailand and Singapore. She is very excited to get the 2012 season underway.