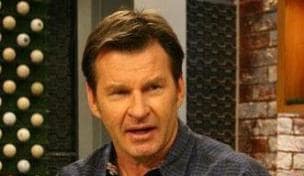 When he began the 1996 Masters six shots behind Greg Norman, he answered every question about Sunday by saying that it is certainly possible to win but when he got home that Saturday night, he thought that if he could get within three shots of the lead he would have a real chance to win. He just kept plugging away all day and by the time he arrived at the 12th tee, he and Norman were tied for the lead. Norman hit it in the water, lost  the lead, and he went on to win by five shots. The key for anyone in that kind of situation is to keep as calm as you can and be able to walk yourself through any shot you want to hit. He pushed himself through the ringer that day.

He feels that 2012 will be a big rebuilding year for Tiger Woods and the fact that he closed 2011 as well as he did can only help. Throughout his career, he has been able to make things happen that he wanted to have happen. When he went out and won the Chevron World Challenge on the back nine by willing it to happen, it was definitely a sign of the old Tiger. This week in Abu Dhabi, the first two days are very important because we will have a good idea of the state of Tiger’s game based on his performance over the first 36 holes. It is very impressive to see the European Tour have an event in Abu Dhabi with such a great field and with such electricity.

Looking ahead to the 2012 Ryder Cup, it cannot be said that the U.S. has the stronger team on paper as it has been said in the past. Europe has had strong teams for years and the potential team for 2012 has a lot of stars and a lot of depth.

Faldo ProCare launches tomorrow and it is a line of skincare products that will help golfers protect their skin when they are on the golf course. It comes in a great package and when you buy the package, you get six different kinds of creams (6-time Major Champion Faldo insisted that the number 6 was random).

When you have an event like Abu Dhabi with a great field and a lot of coverage, it is almost impossible for someone to be under the radar and it is absolutely impossible for a top ranked player to go unnoticed so they definitely have more pressure to play well than in most weeks.