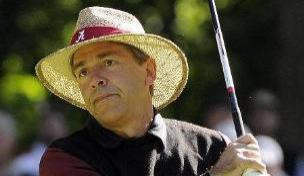 Getty Images
PRATTVILLE, AL - SEPTEMBER 25: Jackie Gallagher-Smith watches her drive from the 10th tee during first round play in the Navistar LPGA Classic at the Robert Trent Jones Golf Trail at Capitol Hill on September 25, 2008 in Prattville, Alabama. (Photo by Dave Martin/Getty Images)  -

University of Alabama Head Football Coach Nick Saban and former Crimson Tide golfer Bud Cauley are teamed together for the AT&T Pebble Beach National Pro-Am this week and they were interviewed for Morning Drive on Wednesday. They are very excited to be playing together and Saban expects Cauley to make all of the birdies because Saban has not had much time to  play although he has been wearing out Alabama’s golf coach in preparation for this week.

Cauley is very honored to be playing with Head Coach Saban because he went to the University of Alabama and he is so proud of what Saban has done. Saban responded that he is a huge fan of Alabama’s golf team and he knows how much they want the National Championship because he is in the same position with the football team. He does not get to watch much golf but he does keep track of what Cauley is doing on the PGA TOUR and thinks that Bud has a very bright future.

The three courses are all different and demanding in various ways and Cauley is going to do his best to help the team and to make sure that Saban is having a great time as this is his first trip out to Pebble Beach to play. Saban does not get to play much during the season but he is happy that his game is good enough to the point where  he does not embarrass himself in front of the other coaches.

Saban is looking forward to  the pairing with Ricky Barnes and Bill Belichick especially because Saban spent four years working for him with the Cleveland Browns. Belichick is a mentor to him and Saban is very appreciative of what he has learned from him and they are also personal friends and have been friends since they were in their 20s. Cauley is very excited to play with Bill Belichick as well and Saban added that no matter what he does, Belichick is the boss and he expects to be taking orders all week.