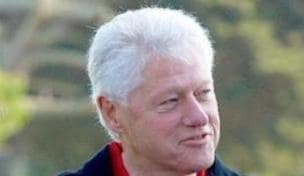 Getty Images
HAVRE DE GRACE, MD - JUNE 14: Anna Nordqvist of Sweden celebrates after making a birdie on the 6th hole during the final round of the McDonald's LPGA Championship at Bulle Rock Golf Course on June 14, 2009 in Havre de Grace, Maryland. (Photo by Andy Lyons/Getty Images)  -

Former President Bill Clinton and his foundation are working in collaboration with the PGA TOUR this week with the Humana Challenge. Morning Drive Contributor Annika Sorenstam interviewed the 42nd President on Tuesday in California at the Health Matters Forum. Clinton is attracted to golf because it is beautiful and it is fun. When he was growing up, he would play in 30 degree weather because he loved being out there so much. It is a lot like life because you get good and bad breaks and at times you do not deserve either of them. It is also a wonderful way to get exercise and fresh air.

When he was younger, his uncle gave him a set of hickory-shafted clubs and without any lessons, he went to the driving range only to find that he had a huge slice. He practiced more and he improved in his game, even coming within inches of making a hole-in-one at the age of 15.

One thing that he hopes for with the Humana Challenge is that it will inspire professional golfers to promote fitness and wellness among all Americans, especially younger and older Americans. When he was growing up in Arkansas, he would go out to a PGA TOUR event and see players who were dramatically different from today’s players in terms of fitness. Also, he did not want to see an event with such great history fade away and he was further inspired by his admiration for Bob Hope. He was fortunate enough to have met and played golf with Hope while he was alive.

One goal that has already been accomplished with the 2012 Humana Challenge is that there are 15 more professionals this year than there were last year. Also, the two players he personally recruited- Greg Norman and Phil Mickelson- are in the field this year. For the future, he hopes that individual players will expand beyond their own foundations and their focus on issues like education to teaching young people about wellness and healthy living. He thinks that it is possible that within three years, the players will have a desire to seek ownership of this event as a platform to promote these very important issues.