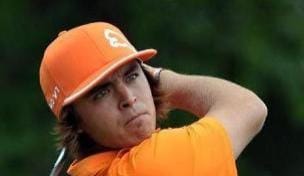 Getty Images
NEWTOWN SQUARE, PA - JULY 3: hits his shot on the hole during the final round of the AT&T National at Aronimink Golf Club on July 3, 2011 in Newtown Square, Pennsylvania. (Photo by Drew Hallowell/Getty Images) *** Local Caption ***  -

As Rickie Fowler makes his 2012 season debut, he begins with a new set of golf clubs from Cobra Golf and will now represent the full Cobra Puma Golf brand on and off the course. It is a big decision to change equipment and while it was not the easiest decision to make, it has been a great transition to go to Cobra clubs and he is very excited about this year.

He had a great year in 2011 with a number of high finishes in some big events like the Open Championship and the WGC-Bridgestone Invitational but he did not play well enough on the weekends. With his new equipment deal, he has a chance to have input on the design which is very exciting but he is still using the same Titleist ball that he used in 2011. He feels like he is ready to grow as a player in 2012 and he looks forward to improving his weekend performance.

The one statistic that is most tangible to his 2011 results is Driving Accuracy. He struggled off the tee all year after the driver he used in 2010 cracked. As a result, he spent all year trying to find a driver that he was comfortable with but now he feels like he will be able to go out onto the golf course and feel comfortable with every club in his bag.

He has had a great relationship with Puma over the past few years and with the union of Cobra and Puma, it just seemed to make perfect sense to switch to Cobra equipment while keeping the Puma clothes and the Titleist ball.

He knows how to make a lot of birdies during tournaments but what will be key in 2012 is getting rid of a lot of the bogeys and the other mistakes. He feels that it is easier to learn how to avoid making bogeys than it is to try to learn how to make more birdies. Since he turned professional, he has played well in a lot of tournaments but he has just been unable to put four good rounds together in one week. He is hoping that soon, he will be able to do that because he wants to be a PGA TOUR winner and he would like to get that first win out of the way.