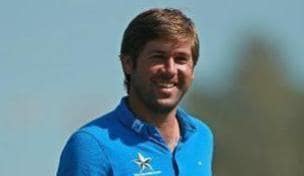 Getty Images
DOHA, QATAR - FEBRUARY 04: Robert Rock of England smiles on the 18th hole during the second round of the Commercialbank Qatar Masters held at Doha Golf Club on February 4, 2011 in Doha, Qatar. (Photo by Andrew Redington/Getty Images)  -

Rock won the Abu Dhabi HSBC Golf Championship and he said that it is difficult at first to comprehend the fact that he beat Tiger Woods when they were playing together in the final group on Sunday. He had some nerves early on Sunday but he settled down a bit when he made a birdie on 2 even though Tiger also made birdie at 2. He had been in good position to make birdie at 1 but failed to do so. After making that first birdie of the day, he felt more relaxed and he was able to then go out and play his game.

He did not speak with Tiger very much on Sunday but they did talk on Saturday when Tiger approached him and introduced himself. Speaking to Tiger the day before made it a lot easier to then go out and play in the same group with him in the final round.

When it comes to his hair, he has heard about some of the talk in the United States and has enjoyed reading comments about it on Twitter. He said it would take quite a lot for him to put on a hat this year. He wore a hat one year and he did not play very well that season. The reason he does not wear a hat has to do with comfort and he just likes the way it feels without a hat on when he is playing golf.

Prior to winning in Abu Dhabi, he did not think that playing in The Masters would even be an option but now that he has jumped to 55th in the world, he is now within striking distance of the top 50 and hopefully some decent golf over the next few weeks will earn him an invite to Augusta National.

Last week there were a lot of funny comments about his hair and his name and he thought that people singing the “Rocky” theme was particularly funny.

In 2011, he took a taxi from Newark to Washington, D.C. to get to the U.S. Open and the price for that ride was over $1,000. He called the USGA and told them that he was having a lot of problems getting to Washington and they said that he could get a cab which is exactly what he did.