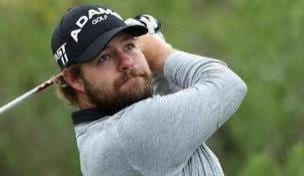 Getty Images
CASARES, SPAIN - MAY 20: Ryan Moore of the USA tees off on the third hole during the group stages of the Volvo World Match Play Championships at Finca Cortesin on May 20, 2011 in Casares, Spain. (Photo by Warren Little/Getty Images)  -

Ryan Moore is not only making his 2012 worldwide debut this week in the Humana Challenge but he is also making his debut as a brand ambassador for the Arnie Clothing Line which is a partnership between Quagmire Golf Clothing and Arnold Palmer Enterprises. He does not do a lot of endorsements but he has decided to endorse this company simply because of the involvement of Mr. Palmer. The people with the Arnie Clothing Line came to him last year with the offer of being involved with the line and Ryan accepted quickly when he learned about the company’s offerings and about Mr. Palmer’s involvement.

When he played in The Masters for the second time, he was paired with Mr. Palmer for the first two days so he has had a number of opportunities to ask him whatever questions he wanted. Just to be able to spend time with him is a great privilege and now to be able to work with him is even better.

Having grown up in Washington State and now living in Las Vegas, he is used to the conditions of the golf courses in the entire region and as a result he has always enjoyed playing the West Coast events and he has been able to play well on a number of occasions.

He loves match play and it would be a wonderful thing to be a part of the U.S. Ryder Cup team at Medinah but the only way that that is going to happen is if he plays great golf in 2012 and he intends to go out to try to do just that. He has been in the running in the past for spots on U.S. match play teams but was not able to quite get onto those teams so he would definitely like to get over that hurdle this year.