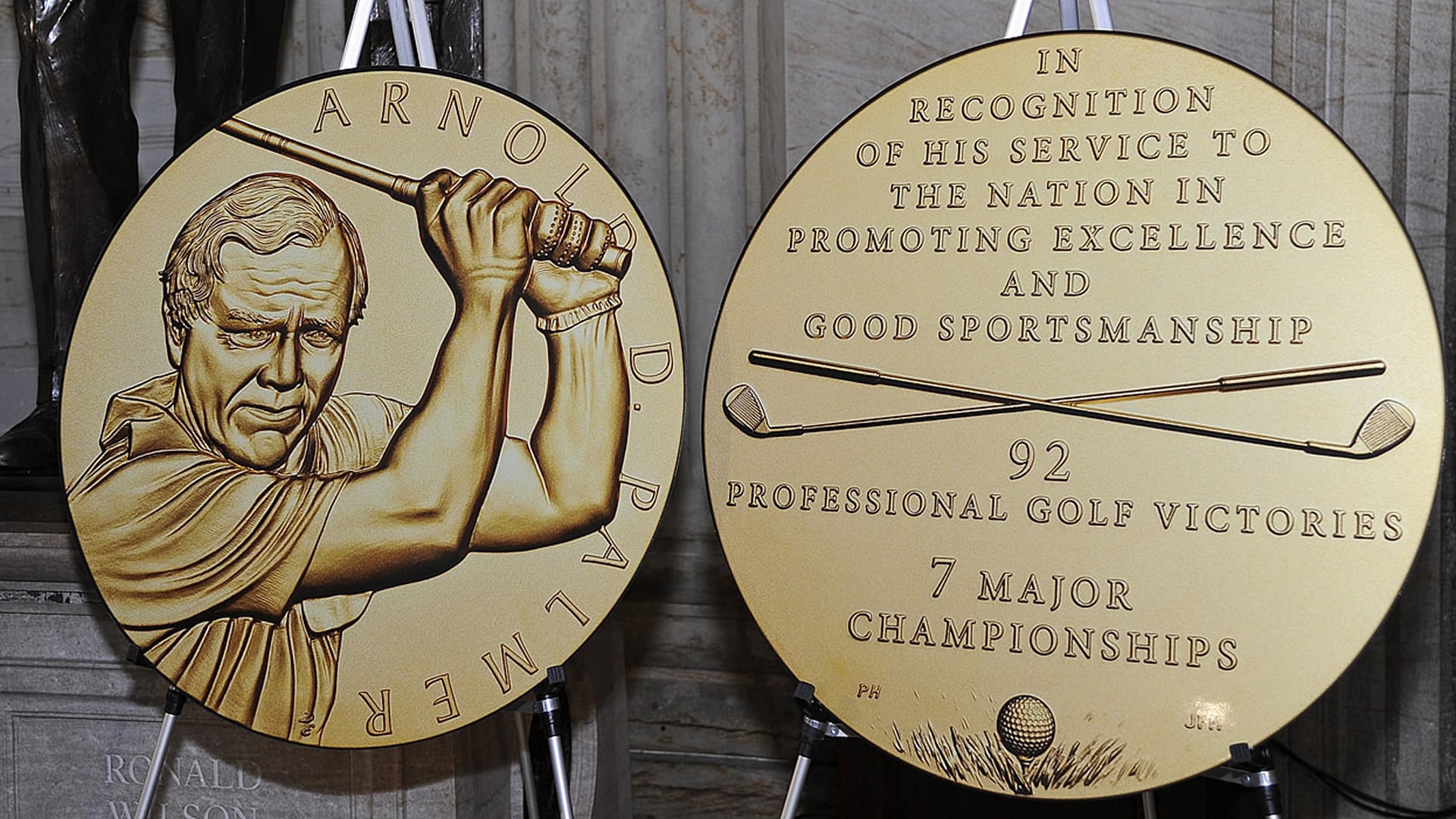 All of them are recipients of the Congressional Gold Medal, but only one of them has his face plastered on a 22.5 fl. oz. Arizona Beverage Company can.

Is it possible now in 2014, 20 years after his final U.S. Open start, that Arnold Palmer is most widely known not for his golf or philanthropy but for the mass production of a lemonade-iced tea hybrid?

What, if anything, can possibly stand up to convenience-store-beverage supremacy?

His seven majors, 26 amateur titles and 95 total professional wins aside, a consideration of the King’s off-course accomplishments – from the success of his own PGA Tour stop, to the founding of the senior tour, to his award from the United States government, and, yes, to the refrigerated section of your local Wawa and/or 7-11 – seems in order.

While in Orlando for the 1962 Florida Citrus Open, Palmer first visited the Bay Hill Club & Lodge, and after seven years of haggling with the club’s ownership group, he finally purchased it outright in 1969.

“I was really not interested in being one member of a large group … some of their members weren’t too happy about that,” Palmer recalled.

The members may not have liked it, but that purchase has paid serious dividends for the Orlando community. Ten years after Palmer took over and began remaking the club, the PGA Tour moved its Orlando stop to Palmer’s new home track. It was one thing to have his own event, much like his rival Jack Nicklaus had accomplished with the Memorial five years prior, but the then-Bay Hill Citrus Classic gave Palmer the chance to begin his charitable efforts in earnest.

“We talked and [Orlando construction magnate] Frank Hubbard said [to me], ‘You could do something more for this community.’ He said, ‘If you were really interested we would make an Arnold Palmer Hospital for Children and Women,’ and so I agreed to that, and the tournament was the benefactor to the hospital, and that’s how it all started.”

“Every time someone walks through those turnstiles at the tournament, it’s helping a child here in Central Florida,” said John Bozard, president of the medical center, “and so we are grateful for the proceeds from the tournament.”

One would assume those previously put-out Bay Hill members probably came around after a bit.

Rewind to Palmer's50th birthday, Sept. 10, 1979. Not coincidentally, the Senior PGA Tour, with a minimum age threshold of 50, started the following year.

One of the many brainchildren of then-PGA Tour commissioner Deane Beman, the senior tour was born from the success of the Liberty Mutual Legends of Golf event that began in 1978, featuring names like Sam Snead, Roberto De Vicenzo and Julius Boros.

But the real draw of the newly formed senior tour, and the reason it exists more than three decades later as the Champions Tour, wasn’t Boros or De Vicenzo or even Snead.

From Hollis Cavner, executive director of the tour’s 3M Championship: “I don’t think there would be a Champions Tour today if it wasn’t for Arnold.”

From current tour member Bobby Clampett: “If it wasn’t for Arnold Palmer, we would not be out here on the senior tour or Champions Tour competing.”

From writer John Feinstein: “There wouldn’t have been a senior tour without him.”

Palmer himself describes the initial motivation behind the tour as an opportunity for players of a bygone era to still compete and to play for amounts of money that simply weren’t up for grabs when those then-greats were at their peak. Of course, it was Palmer who was drawing that money to the tour.

The senior tour, more than anything, was an opportunity for golf fans to continue to see Palmer in person and on their television sets. Though he won only 10 senior tour titles, including five senior majors, it’s clear he was the driving force of the circuit’s early years, before names like Jack Nicklaus and Lee Trevino crossed the age barrier.

“He started it,” Clampett said. “He got the ball rolling and sponsors soon found that there was a viable product out here on the Champions Tour. When Arnold Palmer was playing it was big news.”

Three decades later, weekly purses on the Champions Tour hover around $2 million thanks in part to Palmer’s initial legwork.

“He was accessible. He went to all the functions,” Cavner said. “He did everything he was asked to do. … Every draw party, every cocktail reception he needed to be at, he made fabulous.”

Amazing what some people can get done at a cocktail party.

Arnold Palmer Half & Half Iced Tea-Lemonade

THE OTHER KIND OF HALF AND HALF

Speaking of beverages, how does one get their own drink named after them?

“I was mixing iced tea and lemonade in my kitchen since as long as I can remember,” Palmer once told Interview magazine. “It wasn't until sometime in the early 1960s that it became associated with me publicly.  I was playing golf in Palm Springs and after a round I asked the waitress in a restaurant to bring me a glass of iced tea and lemonade.  A lady sitting nearby heard me and asked the waitress to bring her a ‘Palmer,’ too.”

The drink unofficially bore Palmer’s name for decades after that, but it wasn’t until 2001 that a man named Mark Dowey figured out how to market it. Sitting with two friends in a clubhouse, Dowey, already in the dairy business, drew up some initial plans for a business proposal on a napkin, which he would later present to Palmer’s management team at IMG.

Once Dowey got Palmer’s blessing, he found a willing partner in the Arizona Beverage Company. As of 2010, the Palmer brand represented 10 percent of Arizona’s business, or $100 million, and 40 percent of its overall growth.

There are plenty of people who have no relationship whatsoever with golf. And yet they still see Arnold Palmer’s face almost every day

And so while Palmer’s legacy extends well beyond golf – both in his charitable and business endeavors – his most amazing accomplishment won’t be found in Latrobe or Orlando or even the supermarket, but in Washington, D.C.

The United States has been from its inception a representative democracy, but the King sure has spent a lot of time in the nation’s capital. Palmer has been awarded both the Presidential Medal of Freedom and the Congressional Gold Medal, the country’s two highest civilian honors.

He is one of only six athletes – along with Roberto Clemente, Jackie Robinson, Jesse Owens, Joe Louis and Byron Nelson – to ever receive the latter distinction.

Voting on whether or not to give Palmer the medal in 2012, the Senate was unanimous while the House passed the motion, 422-1. (The "1" was Rep. Ron Paul, R-Texas, who has always voted against spending taxpayer money to give anyone the medal. And for the record, a referendum to award Nicklaus the gold medal made it through the House in May, with a 371-10 margin.)

And so perhaps this sums up Palmer's most amazing achievement:

“[I am] particularly proud of anything that the House and the Senate agree on,” Palmer said upon receiving the medal.

“It’s humbling to realize that just six athletes have been [given] this gold medal award. I like to think and truly believe that golf and golfers promote some sort of human values that symbolize such characteristics as honesty, hard work, dedication, responsibility, respect for the other guy, playing by the rules. Kind of something we do in the game of golf.

“I am very humbled. Thank you very much.”