With a little help from Tiger, Day prevails at Bay Hill 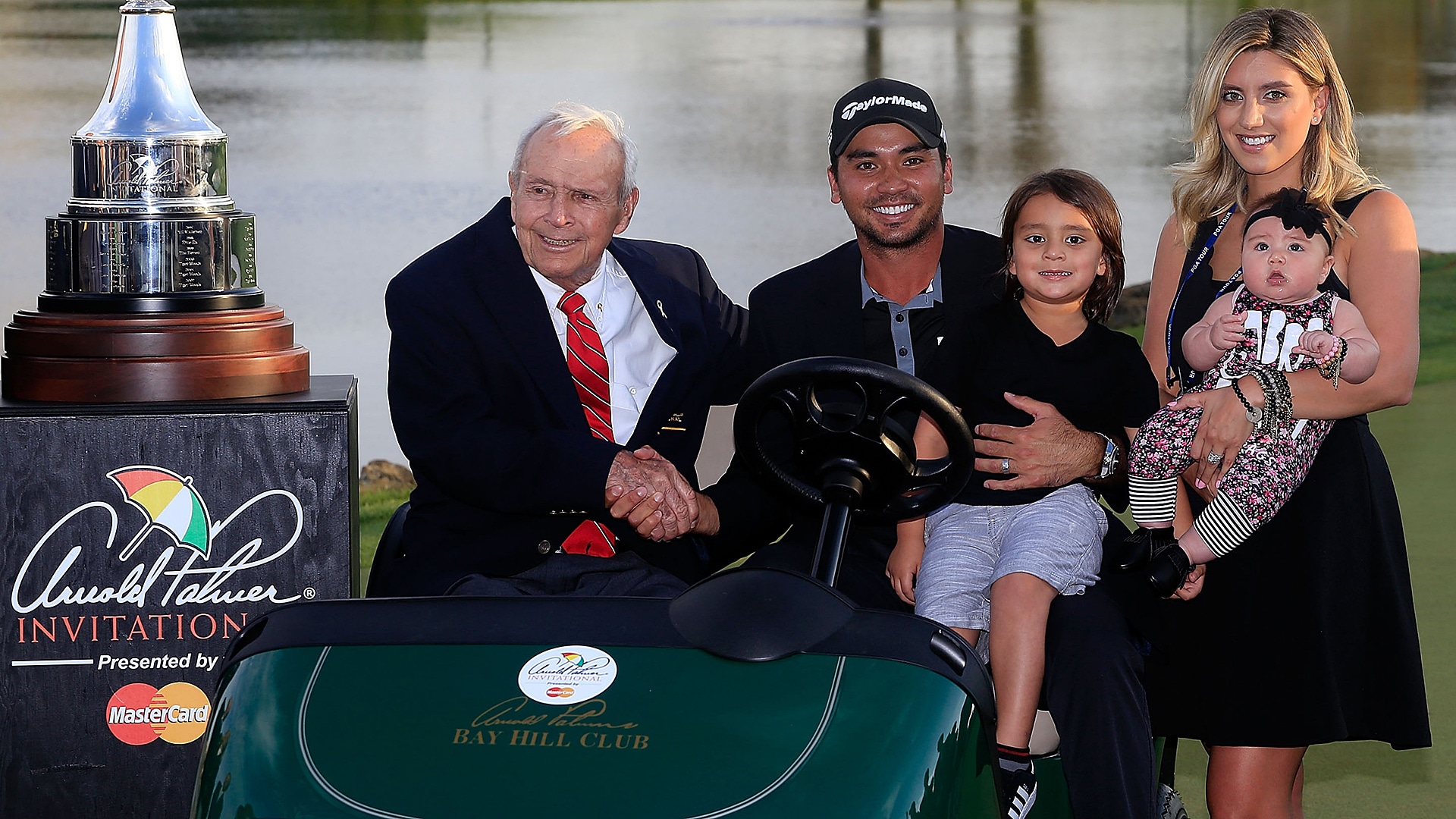 ORLANDO, Fla. – Jason Day had watched Tiger Woods win eight times before at Bay Hill, and he wanted to do it, too.

After Day saved par from the greenside bunker on the 72nd hole Sunday, he finally had the chance to do something else he's watched Tiger do over and over again.

Day, with his son Dash by his side, walked up the hill left of the 18th green and found a familiar face sitting in a golf cart, waiting to greet him.

As Day later put it: “It’s great to shake the King’s hand.”

So what then, after all those years of thinking about it, did Day finally say standing face to face with Arnold Palmer?

“I just thanked him for what he's done for the game and what he's done for us as players,” said Day, who has risen from serious teenage troubles to late-20s stardom. “It's obviously very quick and brief but to be able to walk up there, and in the past be able to watch people walk up there, and have that special moment with the King, it's something that I've always wanted to do. Especially [after] watching Tiger in the past do it a lot, I've wanted to do that.

“It is one of those tournaments that, you know, the biggest guys usually win, and I was just very pleased to shake his hand,” he said.

With his par on the 72nd hole and a round of 2-under 70, Day won his eighth PGA Tour title and his first Arnold Palmer Invitational. One shot back with two holes to play, he ripped a 5-iron from 222 yards and poured in a 12-foot birdie putt at the par-3 17th. He then edged runner-up Kevin Chappell for the title when he, unlike Chappell, managed to make par from the rough right of the fairway on 18.

After clearing gallery members out of the way, Day, knowing he needed par to win, set his sights on the back-left bunker.

“[Chappell] bogeyed, obviously, and I was nervous standing over that tee shot,” Day said. “I missed it right, but the first thing that came into my mind was hit it long in the bunker, the back-left bunker. At least it's straight down the grain. I can give myself an opportunity for par at least.”

He splashed his 30-yard bunker shot to just 4 feet, then rolled in the putt for par and the win.

Day might well be on his way back to No. 1 again. Sunday’s win was his seventh on Tour since the start of the 2013-14 season. It’s the most for any player over that span. Jordan Spieth has six, and Rory McIlroy and Bubba Watson have five. Speaking of those names, Day just passed McIlroy to move back to No. 2 in the world. He’s close enough to start mounting a challenge to take back world No. 1 from Spieth.

Day has done all of this in the last two years – and especially in the last 12 months – with some help from a friend, another former No. 1 and his longtime idol. A guy who has gotten to shake Arnie’s hand an extra seven times.

Sitting with Dash on his lap and the API trophy to their right, Day said he’s been texting with Woods all week, soliciting his advice on how to win at Bay Hill. The two have been talking like this for a while now, and Day hasn’t been shy about crediting Woods for his breakthrough over the last year. The two were in contact right up to Day’s tee time on Sunday.

“Traded texts last night and this morning,” Day said. “It's the same thing ... He sends the same stuff to me, ‘Just be yourself and stay in your world,’ and for some reason it just means so much more.

“It gives me so much confidence that a person like that would believe in me. I was idolizing him ever since I was a kid and watching him in '97 win the Masters for the first time and all of a sudden I'm playing the Tour and I'm pretty close with him now.”

Of course, Woods was the last player to win here wire to wire when he did it in 2002. But Tiger shared the lead after the first round. In the eight times he won this event, he never held the outright lead for all four rounds, like Day just did.

“I never knew that, and I will text him that tonight,” Day said with a smile. “You know, regardless if you win wire to wire or you win pretty or you win ugly, a win is a win. It's a great feeling and nothing beats winning.

“Like I said, he's been a big influence in my life ever since I was a kid," he said. "And to have his advice, to be able to go see him and practice with him and pick his brain about numerous things that I want to try and improve my game ... it’s been a big credit to him.”