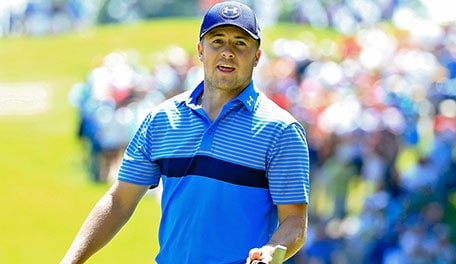 SILVIS, Ill. - Well, this is what happens when you win the U.S. Open, go to the Bahamas for a week, and only do range work the week after.

None of which sounds half bad, by the way.

In his first round since his second major victory, Jordan Spieth kicked off a whole lot of tractor rust Thursday at the John Deere Classic, turning in a lackluster even-par 71 in Round 1 that has him eight shots back of the lead shared his good friend Justin Thomas and Nicholas Thompson and two shots higher than the field average.

"Just a little rusty," Spieth said. "Yeah, just a rusty round. ... I certainly saw a lot of rust yesterday, and this was actually a slight improvement today."

The debate for the last two weeks has centered on whether or not Spieth should be here at TPC Deere Run, whether he would have been better off at the Scottish Open or even practicing at St. Andrews.

What's clear after hearing his post-round comments and watching his shoddy short game is that he just needed to play somewhere, anywhere. Scotland, Illinois, Mars - which probably has the topography for links golf when you think about it - wherever he chose to do it, the 21-year-old reigning Masters champion needed to get on a golf course shake off the rust that had built up from his, albeit brief, post-U.S. Open break.

"Rust comes from just not playing," he said. "I took a week off, didn't touch a club. I don't do that very often in the summertime. I came back and I worked really hard with my instructor, tee-to-green and putting, but it was all range work. I didn't get out on the golf course, like I maybe should have."

In fairness, he should probably be talking about a round closer to the mid-60s than the low-70s. Spieth, who's won the last two majors thanks in large part to his putter, missed seven birdie tries from inside of 15 feet. Two of those came on the first two holes, and both of them hit the lip and spun out.

The second-to-last one came missed low at the par-5 17th and left him yelling at himself. Of course, he should have never been looking at that bending 11-footer in the first place.

"I'm going to have to do a little better than 2 for 7 on up-and-downs to be able to play the weekend," Spieth said.

He's a being a little hard on himself. He was actually just 2 of 6, and that's counting his heavy-handed chip up the hill at 17. His pitching proved the rustiest part of his game right from his first missed green on No. 8. Spieth short-sided himself and from a tight lie in the fairway attempted to bump a wedge shot into the upslope. Instead, he ran his ball 16 feet by and made his first bogey. His second failed save came from the greenside bunker on No. 9 and was set up by a poor drive tugged left.

And the third one on No. 11, that seemed to be all frustration. After bogeys on Nos. 8 and 9 and another failed birdie try on 10, Spieth missed the 11th green far to the right and very much rushed his third shot. He hardly walked up to survey the green, failed to carry his ball far enough, and then saw it roll back down the slope, 30 feet from the hole.

It was at that point that aggravation appeared to be taking over. Another stubbed chip on 12 that prompted a brief staredown between Spieth and his ball didn't appear to help matters.

And then, improbably, after all those missed looks from close range, he made birdie from just behind the lip of the left bunker on 13, playing to the middle of the green and snaking a 32-footer from left to right. From there, he'd follow up with another birdie on the short 14th and par his way into the clubhouse.

It's worth nothing that Spieth didn't play particularly well in his first round after the Masters either, and then followed up at an opening 74 at Harbour Town with a 62 on Friday. He also opened with a 71 here last year and parlayed that into a T-7.

"I can draw on a lot of solid rounds,” he said. “I just need to play decent golf tomorrow. … My up-and-downs out here, given that they weren’t very challenging other than the one on No. 8, I really should have gotten the rest of them up and down. I lost five shots on those. Otherwise, I’m sitting here 5 under.”

Instead, he’s eight back. And if he doesn’t putt and chip a little better on Friday, that whole conversation about his overseas travel arrangements will be proved for naught. If he doesn’t go low at the birdie-fest that is the John Deere when he tees off tomorrow morning, he’ll suddenly have two extra days to get acquainted with the Old Course.