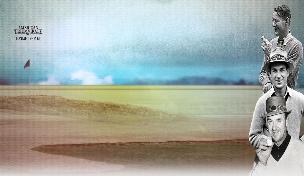 ORLANDO, Fla. (Aug. 6, 2012) – One-hundred years ago, three of the most impactful, game-changing and important names in golf were born three months apart:  Byron Nelson, Sam Snead and Ben Hogan.  Golf Channel will commemorate this centennial next Monday, Aug. 13, the exact 100th birthday of Ben Hogan, at 9 p.m. ET with the worldwide premiere of American Triumvirate, a captivating, hour-long special offering an in-depth look at the careers and lives of each man and who they were beyond the record books.

Narrated by acclaimed actor Kurt Russell, known for his hard-edged, tough guy roles in such movies as “Backdraft” (1991) and “Tombstone” (1993), American Triumvirate, presented with limited commercial interruption by Zurich, will show how this triumvirate of men helped save the sport in America and shape a modern, new era of golf. The film is motivated by American Triumvirate: San Snead, Byron Nelson, Ben Hogan and the Modern Age of Golf written by author and golf historian James Dodson.

Between these three men the numbers are staggering:  198 combined PGA TOUR wins, and 21 combined major titles.  Snead captured more victories than any other man in Tour – perhaps world – history.  Nelson won more events consecutively and in one season than anyone else ever has or ever will.  And Hogan authored the greatest career comeback – and arguably the greatest swing – golf has ever known.  As the documentary transports viewers back to the early days of professional golf, it also highlights the myriad accomplishments of Nelson, Snead and Hogan that shattered the record books – their 198 combined titles are 39 more than Jack Nicklaus, Arnold Palmer and Gary Player won as The Big Three.

Their accomplishments in golf are well documented, but through archival footage and interviews with family members, historians and contemporaries, American Triumvirate also paints a different picture about these men.  Stories told will shed light on what really defined them, which was so much more than what they accomplished on the golf course.

“Because they were from anonymous places, they had authenticity … these guys did it without any help, they did it by themselves.  They were models of absolute self-determination.” – James Dodson, golf historian and author of “American Triumvirate:  Sam Snead, Byron Nelson, Ben Hogan, and the Modern Age of Golf”

“You can always argue who was the greatest player, but Byron was the finest gentleman the game has ever known.” – Ken Venturi

The documentary begins with a look back at the 1912 birthplaces of each man, from the high plains and small towns of Texas (Nelson and Hogan) to the Blue Ridge hills of Virginia (Snead).  Captured through past interviews with Nelson and Snead – and through the remembrances of Hogan’s widow, Valerie – viewers will discover how the hardscrabble circumstances of their youth and coming of age during the backdrop of the Great Depression formed for each man a blueprint for future greatness – but greatness achieved in uniquely different ways.  The year, 1912, also saw the Titanic christened and sank, the first transcontinental flight, and famed Fenway Park and Tiger Stadium opened.

American Triumvirate will air on the heels of the 2012 PGA Championship.  Golf Channel will host a special, pre-screening for family and friends of Hogan, Snead and Nelson, and for golf industry professionals tomorrow evening on Kiawah Island, S.C., site of this year’s final major championship tournament.  American Triumvirate was produced by Golf Channel in conjunction with Mickey Holden Productions.

Quotes from the documentary:

“Sam Snead’s tempo was fantastic.  I thought it was the best tempo I’ve ever seen.” – Jack Nicklaus

“You can always argue who was the greatest player, but Byron was the finest gentleman the game has ever known.” – Ken Venturi

'Anybody that says 11 straight is no big deal, for any reason, whether it was war time or there was nobody playing or whatever … look at the scores that he shot, the courses that he played.  Eleven straight is astonishing.” – David Feherty on Byron Nelson’s record of 11 consecutive victories on Tour in the late ‘40s.

“If Tiger didn’t do it in 2000, I don’t see how anybody’s going to do it.  Eighteen wins in one year will never be broken.  Eleven straight … you can’t say anything is impossible, but that’s as close to impossible as I think it will ever be.” – Butch Harmon on Byron Nelson’s two victory records.

“I remember screaming … I said ‘Ben, it’s going to hit us,” and I didn’t even realize at the moment that he had jumped in front of me.” – Valerie Hogan recounting the collision with a bus in 1949 that seriously injured Ben Hogan and was thought to have permanently ended his golf career.

'Ben Hogan was a very, very good player before the accident.  I think he was better after the accident.  I think that speaks to how strong his mind, not only his will to survive, will to succeed, and his will to prove everybody wrong that said he couldn’t do something.” – Butch Harmon commenting on Hogan’s inspirational playoff win at the 1950 U.S. Open following his 1949 car accident.

“He did a lot of things for people in our county that nobody knows about, even the people he did it for didn’t know it was him doing it.  He bought people homes, cars … there was people that got groceries from him for months and months and months that didn’t know where it was coming from.” – Jack Snead on his father’s charitable giving.

“They were out there to make a living, and it was difficult to make a living.  Hogan went broke twice, before he ever won a tournament.” – Rand Jerris, United States Golf Association museum director.

“They were all born in 1912, yet they all dominated at different times.” – Martin Davis, golf historian.