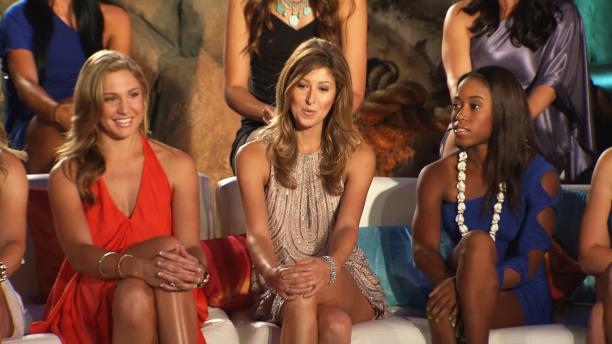 ORLANDO, Fla., July 27, 2012 – Marcela Leon defeated Selanee Henderson in a pressure-packed season finale on Monday to be crowned winner of Big Break Atlantis.  On Monday at 9 p.m. ET, the entire cast will reunite for the first time since the series concluded filming in January.

Hosted by Stephanie Sparks and Tom Abbott, Big Break Atlantis – Reunion will take place before a studio audience at Universal Orlando CityWalk.  The special will feature open, candid and surprising discussion on various topics and situations that occurred during the taping of the series, including how the competitors handled the pressure, meeting World No. 1 Yani Tseng, facing elimination and clashes between the contestants.

'I don’t have any regrets, but sometimes I feel angry because I feel some people were on the show longer that don’t care about golf as much as me.  I’m here for my golf career.  I’m out playing and practicing every day.  I’m not doing anything else.  There are people who still aren’t playing in tournaments…I wasn’t here to get my 15 minutes of fame.”— Big Break Atlantis competitor Meghan Hardin.

'I don’t really know what to say to that, because everyone comes from different circumstances in life.  “You cannot judge if someone if someone is playing in tournaments.  Maybe there is a reason why they are not playing in tournaments.  That is just a bold statement to make, really bold.” – Big Break Atlantis competitor Aubrey McCormick, in response to Hardin’s comments.

When asked by Abbott and Sparks if anything shown on the series surprised them, Zakiya Randall questioned her fellow competitors about some remarks made during a team challenge in one of the early episodes.

'It didn’t surprise me that Zakiya didn’t want to go into elimination against the four of us because I think that she knew we were going to hit better shots than her.” – Big Break Atlantis competitor Shannon Fish.

Following the statement and during a commercial break, Fish placed her hand up to her mouth in the shape of a gun and pretended to blow out smoke.

The show also will reveal the winner of Big Break Atlantis Fan Favorite Poll,  a season-long online fan poll where fans and viewers voted for their favorite competitor on the series.  The winner will receive a potential career-changing prize during the show.

As champion of Big Break Atlantis, Leon receives one of the most valuable prize packages in Big Break series history, highlighted by an invitation to compete in the 2012 LPGA Kingsmill Championship in September and $50,000 in cash.  In addition, Leon receives an Adams Golf endorsement contract, which includes $10,000 in cash; $10,000 shopping spree to Dick’s Sporting Goods; $10,000 car rental credit for from Avis Car Rental and a return trip for two to Atlantis, Paradise Island, Bahamas.

The Big Break show concept pits highly skilled golfers against each other in a variety of challenges that test their physical skills and mental toughness. One contestant was eliminated each week during Big Break Atlantis. The last player standing was awarded her Big Break, a once-in-a-lifetime opportunity to compete in the 2012 LPGA Kingsmill Championship and more than $80,000 in cash and prizes.

Past Big Break champions have won tournament exemptions to compete on some of the world’s top professional circuits, including the PGA TOUR, Champions Tour, European Tour, LPGA Tour, Web.com Tour and Canadian Tour. Tommy “Two Gloves” Gainey, Big Break VII: Reunion champion and PGA TOUR professional, caught the world’s attention in 2011 with three top-five finishes, and Big Break Ireland champion Mark Murphy made the cut in both of his 2012 events on the European Tour he received as a result of winning the series (Trophee Hassan II and The Irish Open).

Golf Channel is a multimedia, golf entertainment and services company based in Orlando, Fla. The Golf Channel cable network, co-founded by Arnold Palmer and part of the NBC Sports Group, is available in more than 120 million homes worldwide through cable, satellite and wireless companies. Exclusive partnerships with the world’s top tours allow Golf Channel to feature more live golf coverage than all other networks combined, added to a programming schedule distinguished by golf’s best news, instruction and original programming. Golf Channel’s digital platform of businesses is led by www.GolfChannel.com, a leading golf destination on the Internet, delivering unmatched coverage of the world of golf, as well as services that help the recreational player with how to play, what to play and where to play golf.

Atlantis, Paradise Island is the flagship resort of Kerzner International, a leading international developer and operator of destination resorts, casinos and luxury hotels. This unique, ocean-themed destination is located on Paradise Island, The Bahamas, and features a variety of accommodations, all built around a 141-acre waterscape comprised of over 20 million gallons of fresh and saltwater lagoons, pools and habitats. Home to the largest open-air marine habitat in the world, there are over 50,000 marine animals in lagoons and displays, including The Dig, a maze of underwater corridors and passageways providing a journey through ancient Atlantis. Atlantis is home to Aquaventure, a non-stop water experience consisting of thrilling water slides, a mile-long river ride with high intensity rapids and wave surges, and never-before-seen special effects. Dolphin Cay, the resort’s interaction and education center, was created with the goal of enlightening visitors about the wonders of these remarkable ocean inhabitants. The Cove Atlantis, a 600-room resort, features oversized rooms with a step down living space, spectacular designs by acclaimed interior architects Jeffrey Beers and David Rockwell, unprecedented services and amenities, private all-adult and family pools, lavish cabanas and breathtaking views of the ocean. Atlantis is also known as THE culinary destination in The Caribbean with a collection of restaurants from world-renowned chefs including Nobu Matsuhisa, Jean-Georges Vongerichten and Bobby Flay. The resort boasts an impressive collection of luxury boutiques and shops, and the largest casino, conference center, meeting and convention facilities in The Caribbean.