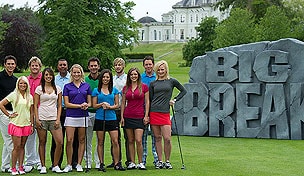 Getty Images
LA QUINTA, CA - JANUARY 23: Jason Dufner chips onto the ninth green on the Nicklaus Private course of PGA West during the third round of the Bob Hope Chrysler Classic on January 23, 2009 in La Quinta, California. (Photo by Stephen Dunn/Getty Images)  -

ORLANDO, Fla. – This fall, 12 professionals will journey to the Emerald Isle with hopes of putting their careers on the fast track when Golf Channel’s “Big Break” series returns for its 16th season.

“Big Break Ireland,” premiering Sept. 20 at 9 p.m. ET, will feature an international cast of six men and six women competing against each other in an attempt to make their dreams of playing alongside the world’s top golfers a reality. Filmed at the K Club in Kildare, Ireland, the ultimate winner will be awarded two exemptions from the four exemptions up for grabs – which represent events on the LPGA, European Tour and Ladies European Tour – among other prizes.

One of the tournament exemptions will be the European Tour’s Irish Open in 2012. This year’s Irish Open, will include Waterville, Ireland, native and “Big Break Ireland” contestant Mark Murphy, who is competing this week on a sponsor’s exemption.

The competitors on Big Break Ireland are:

Mallory Blackwelder (24, Versailles, Ky.) – The daughter of 13-year LPGA veteran Myra Blackwelder and professional caddie Worth Blackwelder. After traveling worldwide with the Ladies European Tour in 2010, Mallory is competing full-time on the Futures Tour in 2011.

Annie Brophy (24, Spokane, Wash.) – A rookie on the LPGA Futures Tour and Notre Dame alum, Brophy is looking to capture the Luck of the Irish.

Joe Campbell (23, Cheltenham, England / Charlotte, N.C.) – The youngest competitor on the series, Campbell also is the longest hitter off the tee. He works at Carolina Golf Club, saving up money for the mini-tourevents in 2011.

Kelly Jacques (25, Thornton, Colo.) – Jacques made her return to competitive golf in 2011 after taking time away from the game following graduation at the University of Oklahoma. Currently competing on a limited schedule on the Futures Tour, Jacques has a new, fresh outlook on the game.

Bennett Maki (26, Orlando, Fla.) – Unlike a lot of his playing competitors, Maki is starting his professional career. A model and actor, Maki has appeared on numerous commercials that have aired on Golf Channel, which has served as a supplemental source of income to achieving his dream of competing on the PGA Tour.

Matt Melrose (27, Mulanje Malawi / Scottsdale, Ariz.) – A veteran of several mini tours and the Gateway Tour, Melrose is competing without ever having watched a previous series.

Mark Murphy (34, Waterville, Ireland / New Orleans, La.) – An Ireland native, Murphy grew up 4 hours south of the K Club in Waterville. Currently residing in New Orleans, La., Murphy’s dream of playing on the PGA Tour is still alive, although the results as a professional golfer have not come tofruition like he hoped.

Nina Rodriguez (27, San Jose, Calif.) – Currently competing on the LPGA Futures Tour, Rodriguez is a late bloomer to the game, deciding to focus solely on golf at age 19.

Nicole Smith (24, Riverside, Calif.) – Currently living out of her car, Smith is competing full-time on the Futures Tour. The alumfrom the University of Tennessee is looking to follow in the footsteps of “Big Break Sandals” competitor Ryann O’Toole, her close friend and travel companion.

Julien Trudeau (30, Montreal, Quebec / Phoenix) – The lone Canadian, Trudeau is looking to continue the recent success Canadians have had on Big Break. A veteran of several mini tours in the U.S. and Canada, Trudeau was ready to walk away from the game when a friend suggested he audition and give professional golf one more try.

Andy Walker (36, Phoenix) – A veteran of several professional golf tours, Walker has yet to have that breakthrough year. In addition to competing on the professional circuits, he also is a professional golf instructor, assistant golf coach at South Mountain Community College.

Whitney Wright (26, Greenville, S.C.) – Girlfriend of “Big Break Indian Wells” competitor Robbie Biershenk, Wright is competing on the Futures Tour and supplements her income by competing in charitable competitions on the golf course.

Tom Abbott and Stephanie Sparks return as co-hosts for the series. 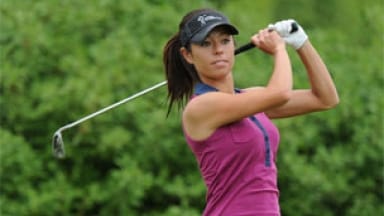 As part of winning Big Break Ireland I received an exemption to play in this weeks Irish Open. I've been excited about playing at Portrush since last May when I lifted the Big Break trophy. 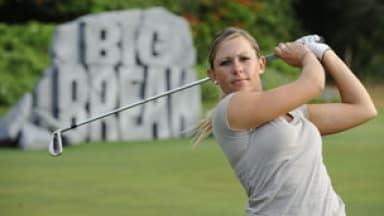 The Golf Channel original series, Big Break, is all about dreams coming true and getting your chance to play on Tour. Lots of dreams came true this past weekend for a handful of Big Break alumni, including Sara Brown.