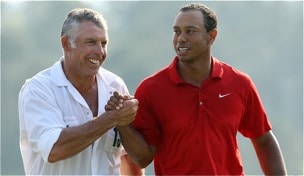 “I want to express my deepest gratitude to Stevie for all his help, but I think it’s time for a change . . . Stevie is an outstanding caddie and a friend and has been instrumental in many of my accomplishments. I wish him great success in the future.” – Tiger Woods, reporting Tuesday on Tigerwoods.com that he had ended his partnership with caddie Steve Williams.

“I understand that’s part of the game … To be let go after staying incredibly loyal during the most difficult time in his life and then for him to decide that he needs a change, I think that the timing has been very poor.” – Steve Williams, later responding to the news he had been fired.

“They had a great run together as a team. Steve Williams is a loyal guy but Tiger is Tiger.” – Mark O’Meara, commenting to the Associated Press about the high-profile breakup heard 'round the world.

“[He] was a great kid to groom – very assertive, very confidential in respect to the boss . . . To me, he was the vital hub to a lot of my success and the same for Tiger.” – Greg Norman, who previously employed Williams as his caddie, commenting to GolfChannel.com on Williams’ worth as a professional looper.

“When Tiger went through the Tiger scandal, as it’s known, I was obviously very disappointed in him, as everyone was. Obviously I lost a tremendous amount of respect for him … and I told him that he had to earn back my respect. Whatever respect he may have earned back, he’s just lost.” – Williams again, commenting further on his strong reaction in the wake of his dismissal from Woods.

“Yeah, I think I can safely say if that happened, I would take that call . . .  I would be silly not to take that opportunity, yes.” - Professional caddie, Tony Navarro, commenting to the Quad City Times on what he would do if Woods asked him to become his next caddie. Many think Navarro is on the short list of Woods’ choices to take the open position.

“The hardest thing with Darren was that he’s been slightly labeled an underachiever. And he was. He had the talent to win a major, an Open, but it didn’t happen. For it to happen like this is just amazing. Now he’s no longer an underachiever.” – Darren Clarke’s agent, Chubby Chandler, in the aftermath of Clarke’s British Open win on how Clarke’s first major title changes the status of his career.

“The game is fickle . . . It hammers you, it hammers you, and then it gives you something.” – Darren Clarke, on how the British Open title came out of seemingly nowhere after years of missed attempts in majors.

“There’s not much I can do; golf kind of means nothing when you know your fellow Norwegians are going through what they were today, and families might not even know if their kids, or if their family members, are still alive.” – Suzann Pettersen, commenting during the Evian Masters after learning of the violent terrorist attacks in Oslo, Norway, where Pettersen was born.

“He won three in a row. I’m glad I got two of them. Now that I can’t play this one anymore I’m going to go after the Amateurs he won.” – Jordan Spieth, explaining after he won his second U.S. Junior Championship Saturday that he would like to chase down Tiger Woods’ record of three U.S. Amateur titles. By winning his second U.S. Junior, he joined Woods as the only multiple winners of the event in its 64-year history.

“The plan is to have five truly mega events.” – LPGA commissioner, Michael Whan, on announcing the Evian Masters will become the tour’s fifth major championship in 2013.

“I have 294 messages, and the writing is far too small for me to look at them in this state.” – Clarke again, following his victory celebration on Monday morning, noting to the press that he had not slept yet since finishing the tournament.