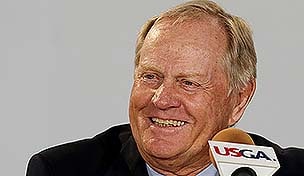 Getty Images
SAN FRANCISCO, CA - JUNE 13: Jack Nicklaus speaks with the media at a ceremony to honor Nicklaus's contributions to the game of golf prior to the start of the 112th U.S. Open at The Olympic Club on June 13, 2012 in San Francisco, California. (Photo by David Cannon/Getty Images)  -

“He appeared in front of me and I didn’t know if it was part of the deal. I never won a major, I never know what to expect.” – Webb Simpson, on a mysterious man jumping in front of the TV camera and crowing like a bird while Simpson was being interviewed by NBC’s Bob Costas on winning the 112th U.S. Open.

'Kind of neat, isn't it? Take an old guy and honor him. I think that's pretty nice. It's pretty humbling and meaningful.' – Jack Nicklaus, on the renaming of the U.S. Open winner's medal to the Jack Nicklaus Medal.

'He wants to win another major championship so bad to shut everybody up, I honestly believe the pressure got to him and he choked.' – Brandel Chamblee, on Tiger Woods falling out of the U.S. Open title race in the third round.

'My Buddy, Chris, he was like, 'Hey, Andy, look behind you, it's Tiger.' I looked back, it was Tiger walking up. I got really excited, and he actually came up to me and shook my hand. I was like, 'Wow, I just shook Tiger’s hand.'' – Andy Zhang, on meeting Tiger Woods. Zhang, 14, made history by becoming the youngest competitor in the history of the U.S. Open.

'I still have the goal to be low amateur, but my new goal now is to win the tournament.' – Beau Hossler, 17, after a third-round 70 that left him four shots off the U.S. Open lead.

'It was a very nice shot, especially because I was playing a match against Gonzalo, and I beat him thanks to this shot, so that’s the most important thing. Unfortunately, it was in a practice round. But it is a good sign, isn’t it?' – Alvaro Quiros, on making a hole-in-one on the par-4 seventh hole during a practice round for the U.S. Open at The Olympic Club in San Francisco.

'I just try to tell Phil to embrace it. Tiger is the best player in the world, and that’s who you want to be paired with every chance you get, so look at it as a challenge. Know if I can beat this guy, I’m going to have a good chance to win.' – Phil Mickelson's swing coach Butch Harmon, on the USGA's decision to pair Mickelson and Woods in the first two rounds of the U.S. Open.

'I've probably given it more thought than golf.' – Rory McIlroy, on throwing out the first pitch at the San Francisco Giants game. McIlroy missed the cut after shooting 77-73.