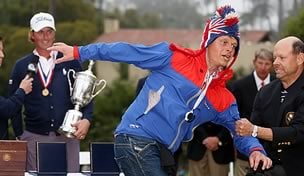 'The San Francisco police arrested me and took me to the station, but when they got there, the guys were all really cool because they were making bird noises. They had already been watching on YouTube and the Internet.' – Andrew Dudley, better known as Jungle Bird, on interrupting the trophy presentation at last week's U.S. Open.

'So without really thinking too much I went out and grabbed him. As I’m dragging him off the green I thought, 'What am I going to do with him now?' I escorted him right into the bunker and quickly thereafter the police did get him.' – Mike Davis, on his split-second takedown of Jungle Bird during the U.S. Open’s award ceremony.

'There have been several times in history where someone has won a major championship and then gets so busy they can't see straight. That's the danger. You've got to keep it in perspective and learn to say 'no,' because there will be a lot of time-consuming offers coming after winning the U.S. Open.' – Tom Watson, on the advice he gave to new U.S. Open champion Webb Simpson.

'Obviously, when you have achieved so much at such a young age, everything maybe has come so easily. You can’t be No. 1 in the world for 20 years, unless you are Tiger Woods!' – Caroline Wozniacki, on boyfriend Rory McIlroy's recent slump.

'There are a number of reasons, but the main one is I haven't got that much time left at the top and I want to give myself the best chance of staying there as long as I can.' – Lee Westwood, on his plan to move to America from his native England at the end of the year.

'He just hasn't won a major, but he's playing pretty good and he's going to be back, he's definitely going to win again. You know, if he stays healthy, I think for sure because he's still got 10 years to get to where Jack was. So, he's got 10 years to produce four more victories.' – Bubba Watson, on if Tiger Woods will catch Jack Nicklaus' mark of 18 major championships.

'Me and my friends always joke that if I win in Canada one more time, that I’m going to become a Canadian citizen. I love it. The people are so relaxed and I feel very welcome when I go there, so I’m real excited that we have another tournament there.' – Michelle Wie, on playing in the Manulife Financial LPGA Classic in Ontario, Canada. Wie snapped her streak of six consecutive missed cuts with matching 70s on the first two days of the tournament.

'They went and asked the chap 'What are you doing?' and he sort of fumbled out an answer saying 'I've got this wrong – I've done something bad. I wish it hadn't happened, etc. etc.' He's kind of been asked not to come back and that's how the matter has been resolved.' – European Tour chief referee, John Paramor, on caddie Mathias Vinson's attempt to hide an extra club from Jose Manuel Lara’s bag in a bush at the BMW International Open.

'The rule is the rule, but it’s just poorly written, it’s just not specific enough. It’s very vague.' – Cameron Tringale, on the two-stroke penalty he was assessed because his ball moved before he addressed it while putting on the sixth hole at the Travelers Championship.

'It wasn't a very classy move, but then again it's how he makes his living these days. He's kind of a shock jock.' – Ernie Els' response to David Feherty's joke about his putting at the Tavistock Cup in March.