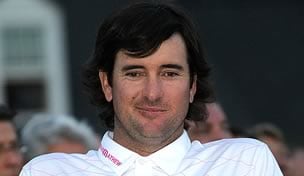 Getty Images
FIFE, UNITED KINGDOM - AUGUST 29: Steve Uzzell of Great Britain & Ireland tees off on the 11th hole during his singles match against Benjamin Herbert of the Continent of Europe for The St Andrews Trophy 2008, held at Kingsbarns Golf Club, on August 29, 2008. in Fife, Scotland. (Photo by Warren Little/Getty Images)  -

'It's going to be amazing – a different feel, different energy – but the best part about it is that it shows me, mentally, that I can do it. It doesn't mean that I'm going to do it every time, but it just shows mentally I can be there on Sunday afternoon.' – Bubba Watson, on playing his first major since becoming a major champion at the Masters in April.

'I couldn’t have asked for a better start to my professional career, to play two majors in a month. I just graduated from college a few weeks ago. I don’t think I can complain about playing in these two tournaments.' – Cheyenne Woods, who missed the cut in her professional debut at the Wegmans LPGA Championship, but will play the U.S. Women’s Open next month at Blackwolf Run.

'Of course, we didn't know it was that good. When we got up to the flag, we were looking behind the hole because we thought it had rolled past the cup. Then I walked up to the cup, looked down, and said, 'You're never going to believe this.'' – ESPN analyst Debbie Antonelli, on former University of Tennessee's women's basketball coach Pat Summitt’s hole-in-one.

'As frustrating as it was today, I just had a lot of bad breaks. One thing goes wrong, everything goes wrong. It just kind of all went wrong today. And the next thing you know, I’m shooting 10 over par.' – Michelle Wie, who carded an 82 Friday at the Wegmans LPGA Championship, and missed her sixth consecutive cut.

'This is by far the hardest year for me, without Pops. I’ve kind of been dreading this week without him here. He’s never missed an event here. That’s been the hardest part, mentally. Every time I walk up to 18th green, I get tears in my eyes, because I look up behind the green where he usually is.' – Paula Creamer, on playing the Wegmans LPGA Championship for the first time since her grandfather passed away. He died earlier this year at 94.

'He went through two world wars and the Depression. He lost his son [and two wives]. His family was so poor growing up that they slept in a car for a time and … he’s the most content person I’ve ever met.' – Mo Martin, on her 100-year-old grandfather Lincoln Martin, who followed her every shot at the Wegmans LPGA Championship from his red scooter.

'I thought it would be a fun thing for my followers. Even if I'm playing bad, like I did today, I think my Twitter followers actually enjoyed it. It was a fun PR stunt for me and for the tournament.' – Joel Sjoholm, on his coach sending on-course tweets to his followers, updating them on his second round of the Nordea Masters.

'Did he make a mistake? Hell, yeah, he made a huge mistake. But did he ruin the game that I play? No. I wish he never would've done that. He might have 100 wins by now, and he would still be picked on.' – Fred Couples, on Tiger Woods' personal affairs that came to light after Thanksgiving 2009. He went on to say it’s time for Tiger’s critics to move past his personal troubles.

'I put everything I could into (his 12 footer for birdie on the first playoff hole).  My dad told me as long as I tried my best that’s all that mattered.' – Andy Zhang, 14, who narrowly missed out on qualifying for the U.S. Open. He would’ve been the youngest player in U.S. Open history by more than a year.

'Oh, yeah, I was watching. I was trying to leave my house to get here (Boston’s TD Garden), and it delayed me for a couple of minutes, but that's fine. That's really cool.' – Boston Celtics head coach Doc Rivers, on running late to Sunday's Game 4 of the NBA Eastern Conference Finals, because he was watching Tiger Woods win the Memorial Tournament.