With a 2-iron, Ariya climbed out of golfing hell 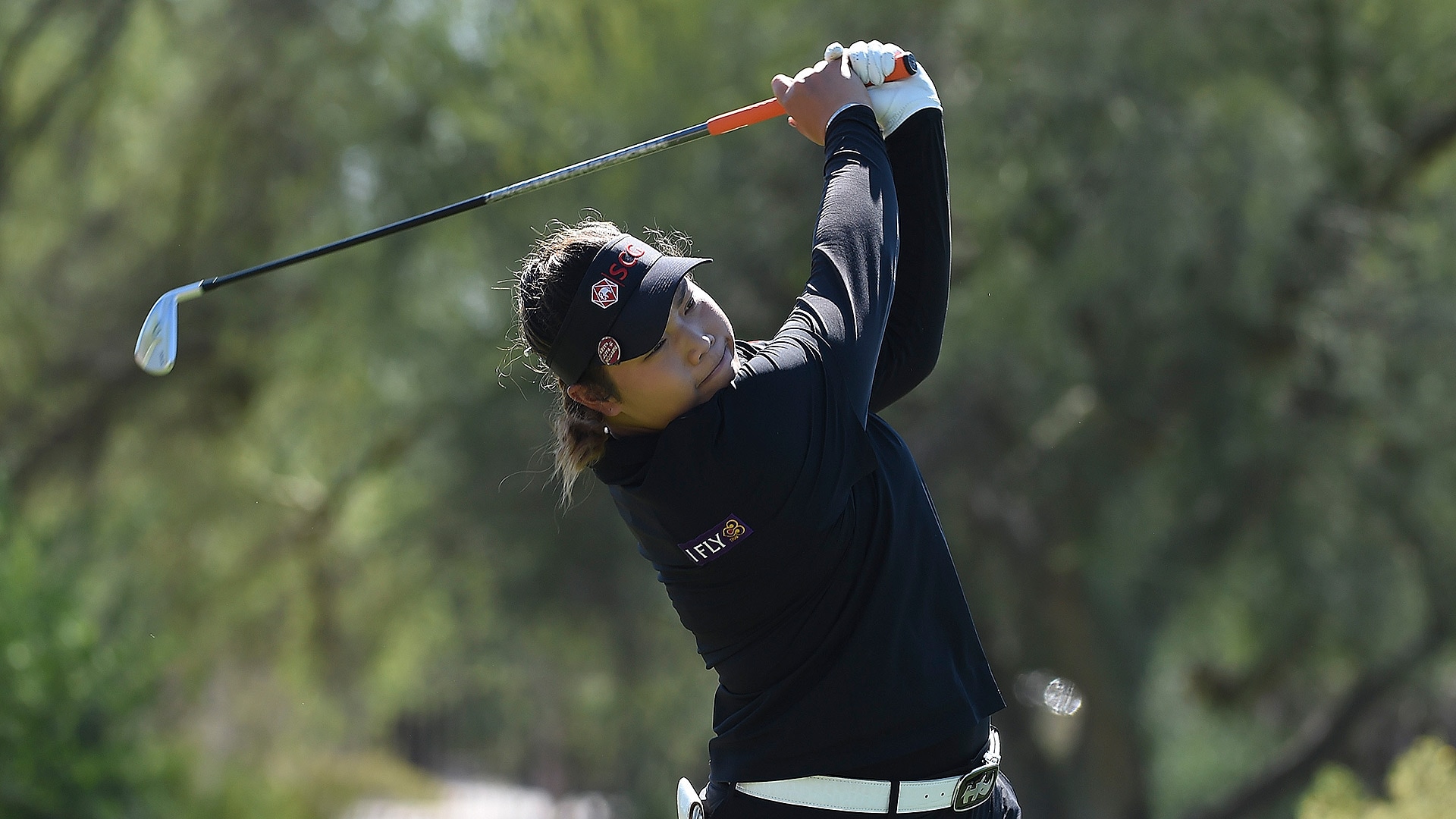 RANCHO MIRAGE, Calif. – When Ariya Jutanugarn first pulled 2-iron from her bag, sparks should have flown.

A choir of angels should have broken into song.

It was like King Arthur drawing Excalibur from the stone.

Something wondrous began happening when Jutanugarn discovered the enchanting qualities this relic from a bygone era possessed.

All those demon doubts haunting her on tee boxes, Jutanugarn started slaying them with this new weapon.

She used it to fight her way out of golfing hell.

The 2-iron made its way into Jutanugarn’s bag two summers ago, when she was mired in a slump that would see her miss 10 consecutive cuts. Back then, fellow players were whispering things no player wants spoken about her. They were whispering that Jutanugarn might have the “driving yips.”

With Jutanugarn returning to the ANA Inspiration this week, the focus is on how far she has come since collapsing over the final three holes last year. Her story is about how quickly she bounced back to win three straight LPGA titles in May. She went on to claim five titles overall last year and win the Rolex Player of the Year Award.

Vision 54’s Pia Nilsson and Lynn Marriott were vital in helping Jutanugarn rebound as her mental coaches. So was Gary Gilchrist, her swing coach.

Her bounce back, though, actually began before the ANA last year.

Really, Jutanugarn’s rebound started the day her caddie, Les Luark, introduced her to a TaylorMade RSI 2-iron back in the summer of 2015. He put the sword in her bag. She used it to pierce the darkness, to slash open the first splintering rays of light showing her the way out of her terrible slump.

“The 2-iron has been awesome for Ariya,” Marriott said. “Kudos to Les for coming up with it.’

Luark began caddying for Jutanugarn amid her slump in ’15. After a shoulder injury, which required surgery and a troublingly long recovery, Jutanugarn swooned. It was stunning how far she fell, because she was such a can’t-miss phenom before.

The injury changed her swing. She changed it to avoid lingering pain, but she began hitting her driver all over the planet. The malady spread, moving through the rest of her game.

Luark saw that as soon as he picked up Jutanugarn’s bag.

“So, just getting to where she had some confidence on the tee, that allowed her to start looking at the other parts of her game. It got her started going in the direction that led to her winning last year. Without the 2-iron, I don’t know if she would have gotten to that stage, at least not as quickly as she did.”

Jutanugarn, 21 now, didn’t want to play the ShopRite Classic in 2015, because the course was too claustrophobic for her. That’s why Luark suggested the 2-iron. He saw how comfortably she hit her 3-iron, and he went to TaylorMade to have the equipment crew shape a 2-iron for her. She teed it up at ShopRite and was pleasantly surprised how far she could hit that 2-iron, even though she missed yet another cut there.

Jutanugarn didn’t immediately shake her slump or quit missing cuts, but there was finally a building block. There was hope.

“A couple weeks using it, the 2-iron was her favorite club,” Luark said.

Who has a 2-iron as a favorite club?

Actually, who else even hits a 2-iron in the women’s game?

Luark says Jutanugarn fretted when he checked her golf bag overnight into the clubhouse storage room at the Kia Classic last week. She hates leaving it anywhere overnight. She worried about arriving in the morning to find the 2-iron was gone.

“I don’t think I could play if it wasn’t there,” she told Luark.

“It’s a go-to club she can trust,” Nilsson said. “She knows she can always put it in play.”

Jutanugarn doesn’t just put it in play. She bombs it. Luark estimates she is carrying it 230 yards this week, and that on firm fairways it can run out to 270 yards. That’s longer than most players will hit their drivers this week.

It’s part of the reason Jutanugarn won’t carry a driver again this week. She hasn’t put driver in her bag for a tournament round the entire year. Still, she can belt her 3-wood past most players’ drivers and hit her 2-iron with a lot of players’ drivers.

Plus, Jutanugarn hits 2-iron so straight.

“I really like it, because I feel like I can control it,” Jutanugarn said. “When I want to hit it in the fairway, I feel comfortable with the 2-iron.”

Gilchrist says Jutanugarn’s miss comes when she gets too steep with her swing. She hits down so hard on the ball. It’s why her iron play is so strong but she struggled with the driver.

The thing is, Jutanugarn is hitting a lot of drivers in practice and pro-ams now. She’s a lot more comfortable with it again, and more tempted to put it in play.

But, Gilchrist is in no rush to push the driver on Jutanugarn.

“Ariya could make twice as much money as she does if she started hitting driver, because she would become this long-hitting phenomenon,” Gilchrist said. “People would think it’s unbelievable how far this woman’s hitting the ball, but if you’ve got a winning formula, why change it? There’s a risk. If you lose your confidence, nobody’s talking about you at all.”

Jutanugarn’s formula has her on the verge of becoming the No. 1 player in the Rolex Women’s World Rankings. A victory this week gets her there. And an enchanting 2-iron helped set this all up.