After stepping away from golf, Wie playing with renewed confidence 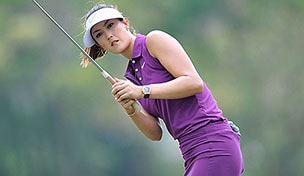 We saw it Saturday at the Honda LPGA Thailand, where Wie’s 3-under-par 69 moved her into a tie for second place, four shots behind Anna Nordqvist.

The effort puts Wie in the final pairing Sunday with a chance to win her third LPGA title, her first in more than three years. She’ll tee it up with Nordqvist and Rolex world No. 1 Inbee Park, who is also tied for second.

“It’s fun being in contention,” Wie said after Saturday’s round.

Those words were music to the ears of her swing coach, David Leadbetter, because he has watched the joy leave her game the last couple seasons.

He saw her grinding too hard to find the form that led so many to believe she would dominate the women’s game. He could see the disappointment wearing her down when the hard work wasn’t rewarded.

So at the end of last year, Leadbetter advised Wie to take five weeks off. She did. She stepped up her fitness routine, but she didn’t play or practice for five weeks.

“I think it’s the first time since she was 5 years old that she has gone that long without touching a golf club,” Leadbetter said. “We had a little boot camp before the start of this year, and you could see she was really refreshed, really ready to go.”

B.J. and Bo Wie did not accompany her to the LPGA season opener in the Bahamas last month, Michelle’s first start of the 2014 season. It might well have been the first time her parents didn’t escort her to a tournament.

“Everyone knows her parents have been very involved,” Leadbetter said. “Sometimes, she rebels. She’s a young woman now, and she has demanded more freedom.”

Wie tied for 13th at the Pure Silk Bahamas. Sunday’s test in Thailand will be different. She hasn’t won since the CN Canadian Women’s Open in 2010. Final round nerves will really test where her game’s at this early in the season. She could get a giant boost of confidence playing well in the final round, or learn just how much more work is left to do.

“I know I want it,” Wie said of winning. “It’s not a question to me how much I want it. I really want that win, but I’m not going to put added pressure on myself."

Ask Wie her goals for 2014, and she won’t say winning. She’ll say it’s being consistent. She believes that will lead to winning.

A lot of the falloff is due to the fact that she hit so many more 3-woods and 5-woods off the tee last year. That’s a function of her driver betraying her too often, and losing confidence in the club that helped make her dominant as a young teen.

In Thailand, Wie’s bombing her driver everywhere. Yes, it’s a course with plenty of room, but it’s more than that. Leadbetter sees her confidence returning with the driver.

“When she has confidence hitting her driver, that’s a good sign,” Leadbetter said.

When her driver was not cooperating last year, she played more conservatively, gearing down with those 3-woods and 5-woods.

“With confidence in her driver, she will be able to play more aggressively when she needs to do so,” Leadbetter said. “She can play to her strengths.”

Of course, Wie’s putting will likely have the final word on whether she wins again. Her move to the unusual “table-top stance,” has helped. She jumped from 119th in putts per greens in regulation in 2012 to 25th last year. Her stance is evolving. She isn’t bent at 90 degrees at the waist anymore. She jokes that she’s got a little more “drawbridge” action now, becoming slightly more erect.

“She’s comfortable with it,” Leadbetter said.

Come Sunday, we will see how comfortable Wie is being back in contention.