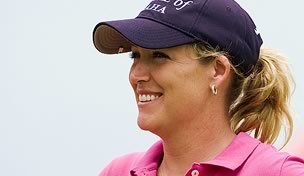 Getty Images
AKRON, OH - AUGUST 04: Lee Westwood of England and Darren Clarke of Northern Ireland during a practice round of the World Golf Championship Bridgestone Invitational on August 4, 2009 at Firestone Country Club in Akron, Ohio. (Photo by Stuart Franklin/Getty Images)  -

While it’s a growing question in the men’s game with the United States enduring its longest winless spell in more than a century of men’s majors, the women are enjoying a resurgence in their most important events.

American Cristie Kerr is back this week to defend her title at the Wegmans LPGA Championship after winning by a record 12 shots last year.

Stacy Lewis is looking to become the first American in 25 years to claim the first two majors of the year.

With American Paula Creamer seeking to add to her U.S. Open title last summer, Americans have built some major momentum.

While the American men have gone five consecutive majors without a title, the American women are aiming to claim four in the last five.

If Kerr wins, she has a chance to regain the No. 1 world ranking she held for five weeks last year.

Given how much grief American women have received for more than a decade, the major run is a point of pride.

With Sweden’s Annika Sorenstam, Australia’s Karrie Webb, Mexico’s Lorena Ochoa and a wave of Asians dominating a changing international game, American women endured a number of long, winless droughts. In 2009, Americans won just four LPGA events, fewest in the history of the tour. They went 17 consecutive events without winning that year, the longest winless spell since the LPGA was created in 1950.

Though Americans won just five times last year, twice this year, they’ve made a large statement in the majors.

There’s more than jingoistic motivation for the Americans to step up.

“It’s great we’ve got players from all over the world playing,” Lewis said. “But I think our tour right now, we need some Americans to step up and play well, especially to get more events in the U.S., to get a lot of the events back that we’ve had in the past. I think it’s great that we go to Asia and Europe to play and all, but the LPGA is a U.S.-based tour and we need some Americans to play well to get that U.S. base back in there.”

The LPGA’s schedule of 24 official events this year features 13 U.S. events. There were 24 U.S. events just three years ago.

Even the LPGA’s international cast sees the value of American success. Norway’s Suzann Pettersen was asked if it bothers her to hear so frequently how important it is for Americans to win.

“No,” Pettersen said. “The LPGA really needs those Americans to play well. That’s nothing to hide under the table. The LPGA, I’m not saying is in great shape. We are struggling. To grow back strong in the American market, we need the Americans, all of them.”

The Americans are eager to oblige this week.