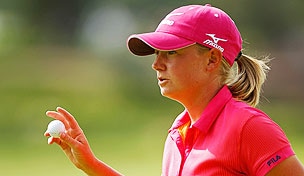 COLORADO SPRINGS, Colo. – Mother nature is adding an exasperating dimension to the most frustrating test in the women’s game.

Lewis was rolling Friday as the leader of the U.S. Women’s Open when the horn blew stopping play yet again, forcing much of the field to pile onto small buses while a thunderstorm blew over.

Atop the leaderboard at the 12th hole when play was halted at 6:08 p.m. MT, Lewis sat uncomfortably on that lead in a bus for an hour.

“I was surprised we didn’t go in,” Lewis said. “We sat with 20 people on that little school bus. There wasn’t any place to go.

“My back started hurting, and I just couldn’t get it loose again after sitting there for so long.”

Lewis, who suffers from scoliosis and underwent corrective surgery as a teenager, struggled after the rain delay. After building a two-shot lead, she gave it away after getting off the bus and struggling to make good swings over the next four holes. She bogeyed the 14th hole and double bogeyed the 15th and found herself two shots behind I.K. Kim when play was suspended due to darkness in the middle of the second round. Lewis has two more holes to play to finish the second round. Kim has four more holes.

“It was hard to get it going again,” Lewis said of the rain delay. “I missed on a couple of drives and got some bad lies.”

Only 33 players had completed the second round when play was suspended due to darkness. This was after a 1-hour and 6-minute weather delay earlier in the evening. Sixty-six players have yet to even start the second round.

“I think, sometimes, it’s more mental than physical at a U.S. Open,” said Angela Stanford, who finished her second round just before sunset and sits at even-par 142.

Players will return to the course at 7 a.m. on Saturday morning to finish the suspended second round. The last second-round tee time is scheduled for 8:39 a.m. The second round, weather permitting, ought to conclude about 2 p.m. After the cut’s made to the low 60 scores and ties and anyone within 10 shots of the lead, and hole locations are changed, the third round will begin. The U.S. Golf Association will send players off the first and 10th tees in threesomes for the third round, but the third round likely won’t conclude until Sunday morning.