With finance the main theme again, we set the storylines for the week with some money quotes.

“Money is power, freedom, a cushion, the root of all evil, the sum of blessings.” Writer and poet Carl Sandburg

We take the express elevator from the PGA Tour penthouse to the basement this week.

Money’s the focus again, there’s just a lot less of it up for grabs with the Fall Series beginning at the Turning Stone Resort Championship in Vernon, N.Y.

A week after Tour pros played for $42.5 million in prize and bonus money at the Tour Championship, the pros at Turning Stone will play for a paltry $6 million. Still, the money may mean more. A couple thousand bucks can make the difference between exempt status next year and a dreaded return to Q-School this fall.

The Tour Championship had the No. 1 player in the world to trumpet. Turning Stone will sell the story of No. 125. Harrison Frazar starts the run of five Fall Series events on the bubble. When the series ends after the Children’s Miracle Network Classic at Disney World, the top 125 on the money list secure exempt status for 2010, Nos. 126-150 win a safety net with non-exempt status getting them into a limited number of events and everyone else is out in the cold.

Frazar, 38, knows how mercurial this game can be. In 12 seasons on the PGA Tour, he has never won, but he won medalist honors at last year’s Q-School, winning in an eight-shot runaway. He shot 59 in the fourth round at PGA West’s Nicklaus Tournament Course. After that confidence builder, he probably didn’t expect to be riding a bubble into the fall.

Robert Allenby is the highest ranked player in the field at No. 30 in the Official World Golf Ranking, but the real action is bunched around No. 125 on the money list. Every player from No. 123 to No. 137 is teeing it up this week. That grouping includes PGA Tour veterans Stuart Appleby (No. 129), Tim Herron (No. 133) and Chris DiMarco (No. 136).

A little more than three months ago, Ricky Barnes and David Duval found their games at the U.S. Open. They made exciting runs into contention before tying for second. Whatever magic they rediscovered that week, they failed to hold onto.

Barnes and Duval will tee it up at Turning Stone 114th and 116th, respectively, on the PGA Tour money list.

“Ordinary riches can be stolen; real riches cannot. In your soul are infinitely precious things that cannot be taken from you.” Author Oscar Wilde.

With three Nationwide Tour titles this year, Australia’s Michael Sim won a battlefield promotion to the PGA Tour, becoming just the ninth player in history to do so, but his timing wasn’t so good.

Sim won his third Nationwide Tour event on Aug. 23, the week before the start of the FedEx Cup playoffs. That meant he had to wait until the playoffs were over to act on his promotion. He’ll do just that at Turning Stone. Sim is the first Nationwide Tour pro to earn the in-season promotion since fellow Aussie Nick Flanagan two years ago.

Adam Scott is making his first PGA Tour start since Greg Norman made him a controversial captain’s pick for the Presidents Cup International squad.

Sabbatini got bumped in the final week from automatic qualification for the team and finished 11th on the International team points list. Singh finished 12th. Norman skipped over both of them to pick Scott.

Scott has a challenge finding his game with the Presidents Cup a week away. He’s sure to feel pressure trying to justify Norman’s confidence. Scott has missed the cut in 10 of his last 14 starts in PGA Tour events.

Love is in the fall air

“It's a kind of spiritual snobbery that makes people think they can be happy without money.” Author and philosopher Albert Camus

With 20 PGA Tour titles, he’s the most decorated player in the Turning Stone field. Love won the Children’s Miracle Network Classic during the Fall Series a year ago, but he’s looking for his first top 10 this season since the Memorial in early June. He played the first three FedEx Cup playoff events before being eliminated and ranks 49th on the money list.

0 for the LPGA summer

“Money, if it doesn’t bring you happiness, will at least help you be miserable in comfort.” Writer Helen Gurley Brown

Lorena Ochoa should have some good vibes working in a bid to break her five-month winless streak when she tees it up at the Navistar LPGA Classic at Robert Trent Jones Golf Trail’s Senator Course at Capitol Hill in Prattville, Ala.

Ochoa’s the defending champion. She knocked off Cristie Kerr and Candie Kung on the second hole of a sudden death playoff there last season. Ochoa had a chance to win at the CVS/pharmacy LPGA Challenge on Sunday, but she was outplayed in a head-to-head final round duel with Sophie Gustafson. Ochoa’s looking for her third title on the season, her first since April. She’s 0 for her last 11 starts.

Ochoa has some work to do if she’s going to win her fourth consecutive Rolex Player of the Year award.

Ochoa’s sixth on the points list in what remains a wide open race with just five events left. Jiyai Shin leads in points with Cristie Kerr second. Shin’s not in the field this week after withdrawing from the CVS/pharmacy due to illness. Kerr is scheduled to play this week.

Navistar’s field doesn’t include Paula Creamer, who’s taking a breather. It does include Michelle Wie, making one of just three planned starts in the fall now that she’s back in school at Stanford. Suzann Pettersen, Angela Stanford, Morgan Pressel, Natalie Gulbis, Christina Kim and Gustafson also are scheduled to play.

“Money was never a big motivation for me, except as a way to keep score. The real excitement is playing the game.” Developer Donald Trump

Two weeks after the PGA Tour halted play, the circuit has stepped in to help bridge the financial gap coronavirus has caused players.

The PGA Tour has canceled another month of tournaments. In a statement Tuesday, the Tour announced called off four more events. 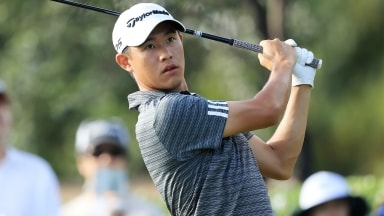 How Morikawa won a DJ-signed driver at Sawgrass

Collin Morikawa has grown up in a hurry – and not just because he’s here at The Players Championship less than a year after turning pro.