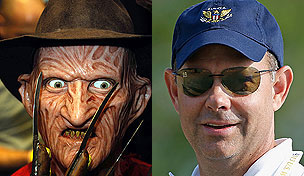 Getty Images
Brooks Koepka makes a tee shot on the ninth hole during round three of the Frys.com Open at the CordeValle Golf Club on October 12, 2013 in San Martin, California. (Photo by Robert Laberge/Getty Images)  -

It’s the spookiest day of the year.

With Halloween here, offices, homes and schools are being visited by costumed guests. Some teachers will be dressing as Frankenstein, or the Bride of Frankenstein, some co-workers as Dracula or the Werewolf, some neighbors as ghosts, goblins and witches.

Hey, it’s all supposed to be in good fun, so that’s what we’re aiming to do here to celebrate this wacky, festive day.

So here’s to aiming some Halloween fright at professional golf.

If the game were to throw a Halloween party with a horror-movie character theme, here are the scariest movies we might expect players to find characters to represent:

As many times as Stenson’s career seems to have been extinguished, he keeps getting back up. The man won’t stay down. Through slumps, illness or injury, Stenson keeps on stalking his fellow Tour pros in the game’s big events. His FedEx Cup title this year was yet another sequel in his success story.

Scott’s pursuit of his first major championship was as dogged and daunting as Van Helsing’s long pursuit of Dracula. With his Masters victory, Scott drove a wooden stake into the heart of claims he wasn’t good enough to win a major.

American Werewolf in London: Phil Mickelson as the title character.

Mickelson was transformed in his visit to Muirfield for the British Open this summer. Links golf wasn’t supposed to be his forte, but Mickelson was the new beast of the links.

Ko could have some fun behind that Chucky mask terrorizing adults at our Halloween party. But, alas, in real life, the 16-year-old New Zealand phenom is probably too sweet to come dressed as anything but an angel.

What happened to the guy who won two major championships in routs and rose to No. 1 in the world? Hmmmm. There’s some Halloween fun there even with McIlroy making a strong move early in this week's WGC-HSBC Champions.

Night of the Living Dead: The Internationals as Zombies.

They’ve been laid to rest, but they won’t be put out of their misery. They get out of their graves and stumble grotesquely after the Americans every other year.

In real life, Davis is impressively gentlemanly and cordial, a strong and gifted leader, but for so many of the Tour pros who love their long putters and belly putters, he’s the guy threatening to turn their dreams into nightmares with his organization’s future ban on anchoring. There’s some good Halloween fun there again.

With his wild run of either missing cuts or winning, McDowell is perfectly cast. In a run of eight events this summer, he won three and missed five cuts.

Boogeyman: John Paramor as the Boogeyman.

A pleasant man who has the hard job of delivering bad news as a rules official, Paramor was the “bogey man” to Guan Tianlang at the Masters. Paramor was the official who informed Guan he was being assessed a one-stroke penalty for slow play at the 17th hole in the second round of the Masters. It turned Guan’s par there into a bogey and created some controversy. It was believed to be the first slow-play penalty handed down in Masters history.