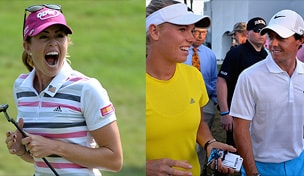 Sometimes, winning and losing isn’t so much about getting a golf club in the right positions as it is getting the heart in the right place.

Even before she won the HSBC Women's Champions Sunday with that dramatic eagle at the second playoff hole, Creamer spoke about how she was in such a happy new place in life, how her engagement to Derek Heath this past offseason was giving her a fresh perspective on her life and what’s important.

“I’m in such a great place,” Creamer said way back at the season opener, after the first round of the Pure Silk Bahamas LPGA Classic. “I’m so happy. Derek just makes me want to be better, makes me want to be a better person. It’s always hard, life out on tour, but now, being able to share things other than with my parents and my caddie, Colin (Cann), it’s been very exciting.”

Creamer, 27, reiterated how important that is to her after she beat Azahara Munoz in that playoff Sunday at Singapore for her 10th LPGA title, her first in almost four years.

“There are a lot of up and downs, but Derek just makes me so happy,” Creamer said. “He just motivates me.”

Social snapshots of the happy couple: Paula and Derek

There’s a familiar ring to this theme in golf of late.

Halfway around the planet from Creamer, Rory McIlroy was saying almost exactly the same thing after the first round of the Honda Classic. He said the nature of his life outside the ropes was making his life better inside the ropes, too.

“I'm in a great place,” McIlroy said. “I couldn't be happier. We've got a home here in Palm Beach. Personal life is great. Looking forward to getting married at some point in the future. If everything's settled off the course, then it helps me perform better on it. I couldn't be in a better place right now.”

Roll back the tape to the end of last year, and you’ll hear Rolex world No. 1 Inbee Park talking about how changes in her personal life led to one of the greatest years the LPGA has ever seen, to her run of three major championship titles.

In her acceptance speech after being presented the Rolex Player of the Year award late last year, Park didn’t focus on swing changes, or swing thoughts, or new equipment. She talked about contentment off the course, about how happy she was with her fiancé, who doubles as her swing coach.

“I am someone who believes in finding happiness,” Park said. “My goal at the beginning of the year was simple: Let’s be happier than last year. Unexpectedly, as soon as happiness became my goal, I achieved more than ever.”

After she won Sunday, Creamer was asked how much her personal life helped her break her frustrating drought of 79 starts without a win.

“It has everything to do with it,” Creamer said.

“Derek was the second one,” Creamer said. “We’re not married yet, so my dad would have been upset if I called Derek first. It’s pretty neat when you can share this with everybody.”

Heath is a 33-year-old pilot from Newport Beach, Calif. Paula met him at the Kia Classic last year through her parents. Paula's father and Derek's father flew together in the Navy and both became commercial airline pilots. They remain close friends.

Through four events this season, Creamer leads the LPGA’s Rolex Player of the Year race, leads the Race to the CME Globe and leads the LPGA money list.

With the win, Creamer will move back inside the top 10 in the Rolex world rankings, moving over Lexi Thompson as the second highest ranked American behind Stacy Lewis.

Creamer is in a “great place” on multiple levels early into the 2014 season. She will tell you the X factor is working for her.