Donald a contrarian but makes it work 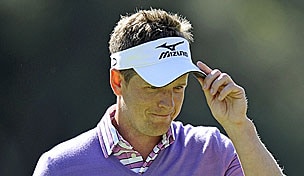 LOS ANGELES – Luke Donald doesn’t strike you as a contrarian.

The mild-mannered Englishman doesn’t strike you as a control freak, either.

As a player, though, he’s intensely both, and that may be exactly why he ascended to No. 1 in the world rankings.

Donald, 34, is off to a solid start in his 2012 PGA Tour debut, posting a 1-under-par 70 Thursday at the Northern Trust Open. In tough, windy conditions at Riviera, he’s in the early mix in a bid to uphold his status as player of the year on the PGA and European tours last year.

Though his nature can seem so pleasantly agreeable, Donald is almost defiant in his approach to the way the game is played today.

With almost everyone chasing distance in this power era, Donald’s seeking more control.

He said as much the day before play began at Riviera, explaining how he believed his focus on honing a razor-sharp short game propelled him to No. 1. He explained how chasing distance probably led to his wrist injury and surgery in 2008.

After Thursday’s round, Donald revealed another staggering development in his approach. He made a significant change in his equipment in the offseason. He shortened the shaft in his TaylorMade R11 driver, abandoning a 44½ inch shaft for a 43½ inch shaft this season. This is like a NASCAR driver going to an engine with less horsepower. It flies in the face of what most every player’s chasing in this power era.

Donald ought to play in plus fours and a Hogan cap. He’s a throwback.

Fred Couples admires the way Donald is getting it done.

“He’s the No. 1 player because he plays very consistent and wins,” Couples said.

Give Donald credit. He has his own plan, and he’s boldly devoted to it.

Let the world tilt at windmills in a bid to conquer golf courses with power. Donald is cleverly finding another way, an old-fashioned way.

What really matters is Donald led the PGA Tour in scoring average (68.86). He did it by leading the Tour in putting and finishing eighth in scrambling.

Donald is becoming a magician around the greens. He showed off his short-game prowess at Riviera Thursday. At the eighth hole, he drilled his drive right down the middle. Unfortunately for Donald, that’s a terrible place to be at the eighth. It’s a split fairway with a small ravine in the middle. After slashing out of a tough spot, Donald faced a difficult pitch from 40 yards to a pin tucked at the back of a crowned green.

With a sand wedge, Donald got clever. He played the ball back in his stance and hit a low spinner, delicately running his pitch to tap-in range for par.

Though Donald seeks control, he acknowledges he wants more distance, but he’s seeking it differently. He’s working on a more efficient swing. He believes he can hit the ball farther with a shorter shaft with a more efficient swing bolstered by work in the gym. He’ll not sacrifice control in his pursuit of power, though.

Donald believes it’s a formula that can help him break through to win his first major championship.

“I hope so,” Donald said. “I certainly feel my game is good enough now to win majors. I don’t feel like I have any huge weaknesses.”