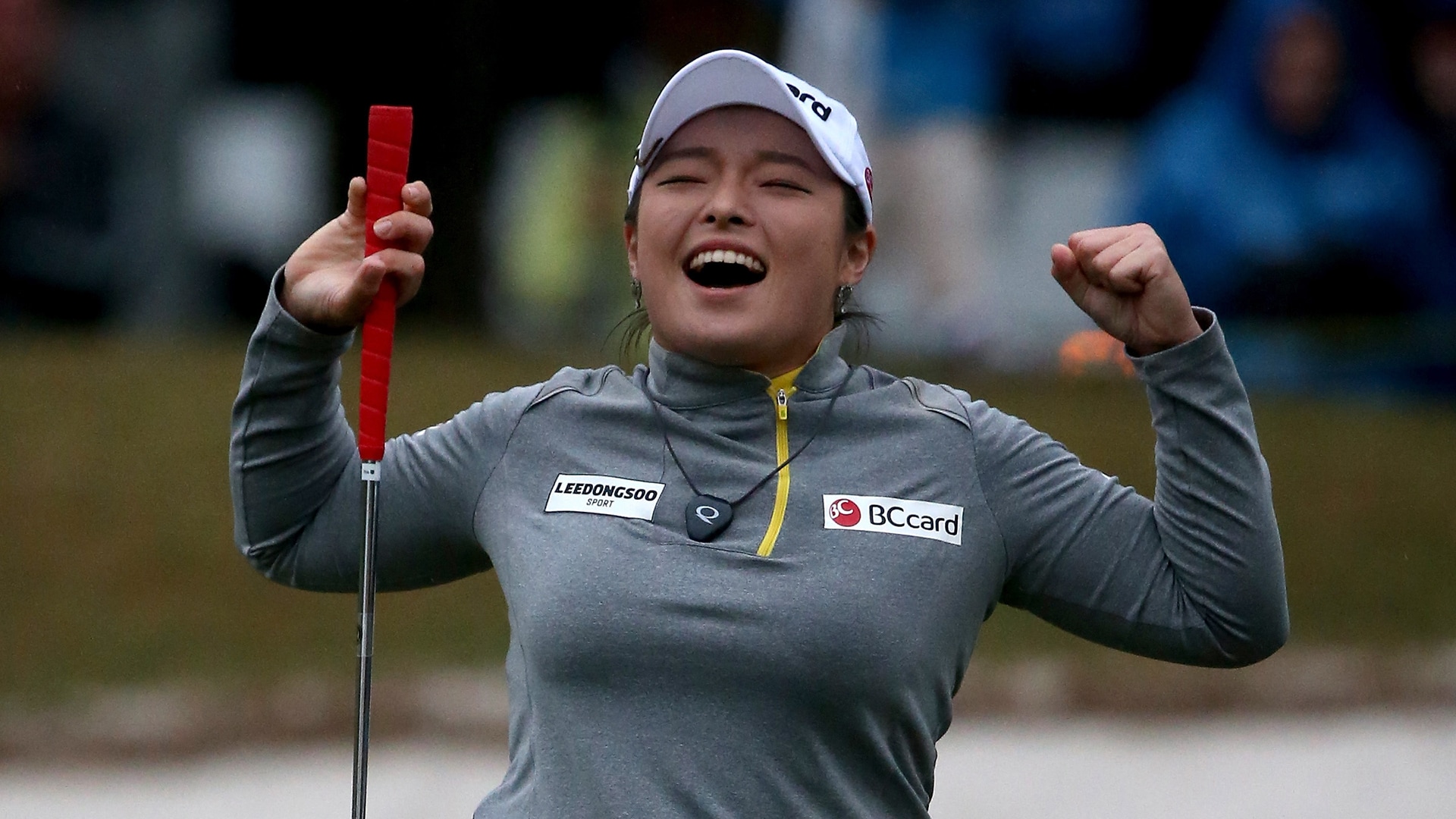 OCALA, Fla. – It was poetic that Ha Na Jang won the Coates Golf Championship Saturday in the rain.

In its two short years hosting an LPGA event, Golden Ocala is becoming the place where victory droughts end.

A year after Na Yeon Choi got emotional ending her two-year victory drought at Coates, Jang couldn’t hold back tears as she broke through to win her first LPGA title.

It was emotional for Choi because she was under so much pressure to end her winless spell. She said she was so overwhelmed by fan and media criticism, she nearly switched to a 2G cell phone so she couldn’t connect to the Internet and see all the venom.

“I got hurt from reading that stuff,” Choi said.

Jang, 23, faced similar pressure, failing to win in her LPGA rookie season last year with young South Korean rivals Sei Young Kim, Hyo Joo Kim and In Gee Chun all winning in the United States. Jang beat out all three of those players for the Korean LPGA Player of the Year Award in 2013 but the best Jang could do on the American-based tour last year was four frustrating second-place finishes. Those near misses included her runner-up finish at Coates last year in her LPGA debut.

“Finishing second four times, it’s been heartbreaking,” Jang said. “I put a lot of pressure on myself, but I worked very hard. Finally, I got there and have the win.”

Jang’s animated personality, with her array of fist pumps and quick smile, has caught the attention of fellow pros. With her victory Saturday, she got the attention of a lot of golf fans outside Korea who may not have known who she was.

When Jang’s last putt fell sealing her victory Sunday, she let loose what she called a “Samurai Lasso” victory celebration. It was even more elaborate than Chi Chi Rodriguez’ sword-sheathing routine.

Jang said she was inspired by Japanese players and a YouTube video of the “Ideal Golf Swing Follow Through” that she saw a couple weeks ago.

“So I try lasso after my putt,” Jang said. “I think it looks like really fun.”

Jang won going wire to wire, leading or sharing the lead after every round. She outdueled Rolex world No. 1 Lydia Ko to get this first victory. Jang and Ko shared the lead going into the final round, but Jang pulled away from the 18-year-old early Saturday, as Ko uncharacteristically struggled. Even Ko was enamored with Jang’s bubbly personality. Jang said she was emboldened with Ko pushing her on.

Jang had to hold off a pair of gifted phenoms in the end with 18-year-old Brooke Henderson making a strong final-round charge. Jang headed to the 18th tee one shot ahead of Henderson, who was in the clubhouse waiting to see how Jang closed.

“Too much pressure in my mind,” Jang said of stepping over a wedge 110 yards from the flagstick at the 18th.

Jang confidently stuck that last wedge to 6 feet, setting up a closing birdie that gave her a two-shot victory over Henderson.

“She played great right from the start,” Henderson said. “I’m happy for her to win out here.”

“Yeah, I’ve never seen that before,” Ko said. “I don’t know how anyone can beat that. It was almost like James Hahn’s Gangnam Style a few years ago. I don’t know who would think of that.”

Ko was impressed at how Jang handled the steady and sometimes heavy rain through the second half of the round.

“Ha Na finished really, really close to winning so many times,” Ko said. “Everyone is happy for her, someone who really deserves it. She’s super talented, and she so deserved this.”

Jang got teary eyed leaving the 18th green looking for her father, Chang Ho Jang. She said even through some recent disagreements and struggles over changes to her game, her father has always encouraged her.

“My dad, every day, every week, is there for me,” Jang said.

Kevin Kim is Jang’s new swing coach. They didn’t begin working together until six weeks ago.

“We’ve made a lot of changes,” Kim said. “We’ve been together almost every day since Dec. 23, from sun up to sun down. It’s been stressful making changes in that short time. Taking them into competition, that’s not easy, but she pulled it off.”

Jang’s caddie, Graeme Courts, was impressed at how his player’s ball striking held up under so much pressure and in such adverse conditions with all the rain.

“She just doesn’t miss a shot,” Courts said. “Her wedge control is excellent. She hits the ball pin high a heck of a lot, and she hits it down the middle of every fairway. She’s obviously good now, but she’s going to be really good.”

Jang was the best at Coates this week.