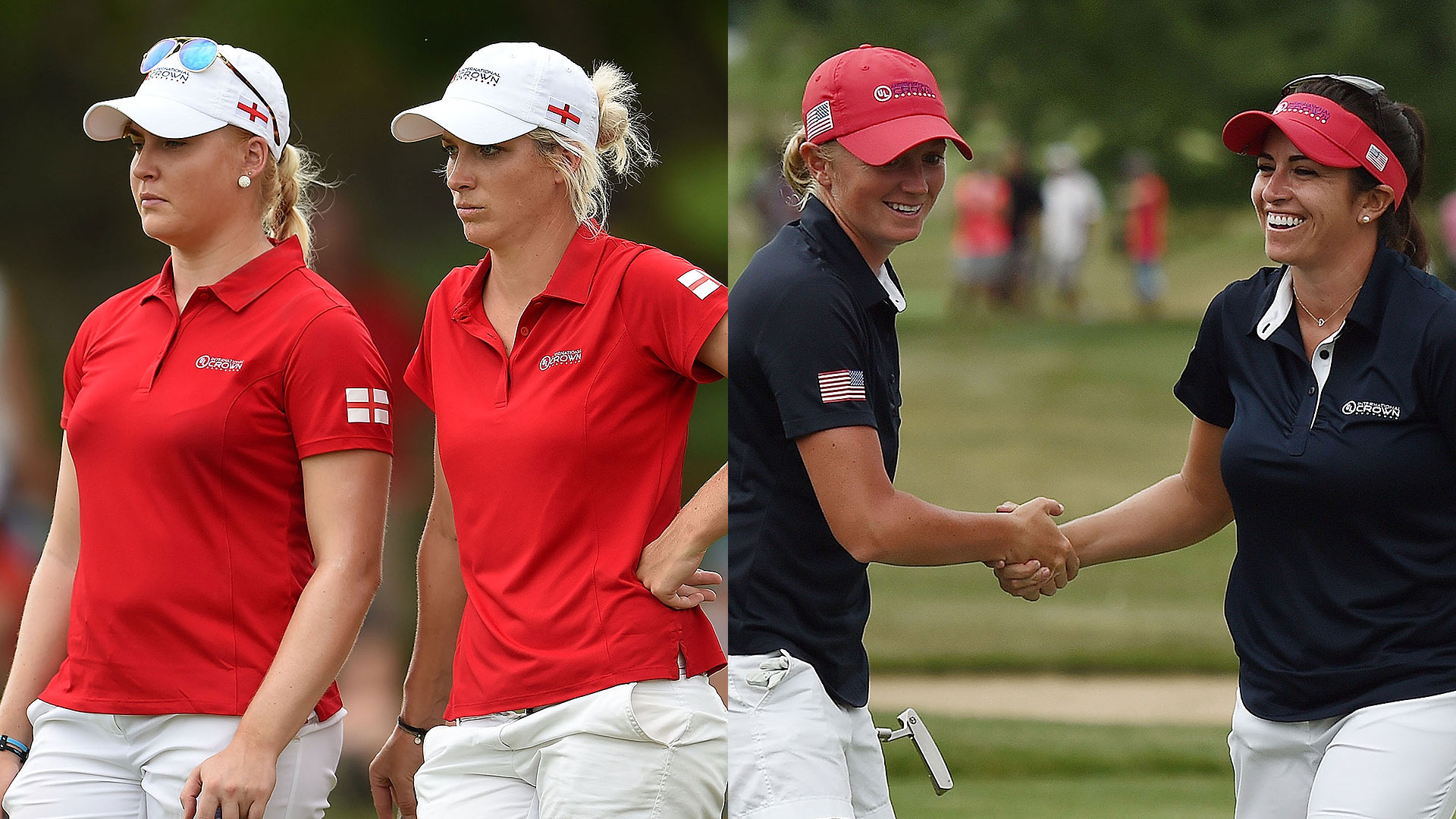 GURNEE, Ill. – England relishes going up against the Goliaths of golf.

They’re thriving at the UL International Crown, where the Koreans and Americans are supposed to win and everybody else is a long shot.

Spain embraced the role in the biennial international team event two years ago, stunning everyone with a free-spirited blitz through pool play and then a sweep of Sunday singles to claim the inaugural title.

Now England is trying to follow the same script going into Sunday singles.

With a pair of routs of Thailand on Saturday, the English completed their second sweep of fourballs in three days. They clinched Pool B, no matter what happens with the two suspended fourball matches yet to be completed between Korea and Australia. England has lost just one of six matches this week.

The Korea/Australia matches, suspended by a passing storm, will resume Sunday at 8 a.m. ET.

“We’re the underdogs,” England’s Mel Reid said. “These are the best countries in the world, some of the best players in the world, and a lot of major champions in there, and we are top of our pool. We should all be very proud of ourselves and we should be taking a lot of confidence in the fact that we've beaten some very high-class players this week.”

As the seventh seed, England is specializing in upsets, although if you ask American Stacy Lewis, there are no upsets in this eight-team format, where fourballs and match play are proving great equalizers.

Spain was the fifth seed going into the inaugural International Crown two years ago.

If England wins it all this week, the International Crown is going to feel like Cinderella’s playground.

“With this format, you take a player that's ranked 50 to 100 in the world, and they can go make seven or eight birdies in a round,” Lewis said. “They may not do it for four straight days and win a tournament, but they can do it for one day. That’s why this format, it opens it up for anybody to win. I don't think there's any team that you can say going into it that they're favored or not.”

Lewis was asked if the Americans and Koreans face more pressure than anyone else this week, because the expectations as the favorites are so much greater.

“Maybe last year, we went into it with a little bit of pressure, thinking we had to perform, but what I've realized with this format is that it really opens it to anybody,” Lewis said.

For the English, though, there’s definitely something freeing about an underdog role.

“For me, it’s an exciting opportunity for us,” Reid said. “It’s another team event, another match play situation, and it’s also an opportunity to prove people wrong. No matter what happens tomorrow -- obviously, we're going to give it the best shot that we have – we've proved a lot of people wrong already. I'm extremely proud of how we've done so far.”

Reid and Hull were in the spotlight again Saturday and delivered, defeating Thailand’s Ariya Jutanugarn and Moriya Jutanugarn, 3 and 1.

Hull was the star in the opening round, leading a sweep of the Americans with six birdies and an eagle in a fourball victory.

Reid was the story of the second round.

With Hull sidelined with an asthma attack on Friday, Reid played solo and nearly beat Japan’s best fourball team by herself, losing to a birdie at the last hole.

On Saturday, with Hull recovered and Reid full of new confidence, they went birdie-eagle-birdie on the back nine to take command of the match.

“I felt fresher today from the first tee; my asthma wasn't as bad,” Hull said. “We played awesome, so it was fun.”

Nobody had more fun than England’s Jodi Ewart Shadoff. She was on fire teaming with Holly Clyburn to rout Thailand’s Pornanong Phatlum and Porani Chutichai. They were 10 under in a nine-hole run in the middle of their round, making eight birdies and an eagle.

“I've been striking the ball great for the last few months,” Shadoff said. “I think today was huge for my confidence, with the putts dropping finally. I'm really excited to get out there and play tomorrow.”

Nobody’s been hotter over two rounds, though, than the Americans Lexi Thompson and Cristie Kerr, who defeated Japan’s Ai Suzuki and Ayaka Watanabe, 4 and 2. Thompson and Kerr are a remarkable 22 under par over their last 31 holes.

After getting swept in the opening round, the Americans have won gone 3-0-1. They’re all members of the U.S. team that mounted the largest comeback in Solheim Cup history last fall.

“I think we actually play better with more pressure than less pressure,” Kerr said. “When our backs are up against the wall, we seem to play better.”