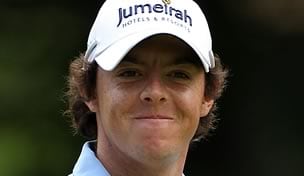 That’s the feeling Rory McIlroy brought to Congressional Country Club Friday with his bold march into the championship’s record book just half way through the event.

Whether it’s a spectacular runaway rout rivaling what Tiger Woods did in the 2000 U.S. Open or a spectacular collapse surpassing what Greg Norman did at the 1996 Masters, you feel the epic nature of this storyline building.

Is McIlroy built more like his generation’s Tiger or Shark?

While the former seems far more likely given the form of the 22-year-old from Northern Ireland, there’s enough doubt in McIlroy’s resume to prevent engravers from getting a head start on etching his name on the U.S. Open trophy.

The final-round 80 McIlroy shot to blow The Masters two months ago sits in the back of your cranium. So does the 80 he shot to derail his opening 63 at St. Andrews in the British Open last summer.

So even on this riveting Friday, there was reason to pause after McIlroy’s errant shot at the finish, his hooked approach into the water at the 18th. His closing double bogey was the only blemish on two otherwise beautiful scorecards.

Backing up his first-round 65 with Friday’s 66, McIlroy set the 36-hole U.S. Opening scoring record. His 131 total is one shot better than the mark Ricky Barnes set at Bethpage Black two years ago.

When McIlroy signed his scorecard, he was eight shots in the lead, two shots better than the U.S. Open record 36-hole lead Woods built at Pebble Beach in his historic romp 11 years ago. By day's end Y.E. Yang trimmed his lead to six.

Stricker was an accidental spectator for much of McIlroy’s run. He was standing at the ninth tee waiting to play when a roar erupted around the eighth green. That’s where McIlroy holed a wedge from 114 yards for eagle.

The hole out was historic because it got McIlroy to 10 under par, making McIlroy the fastest player to reach double digits under par in U.S. Open history.

Stricker, David Toms and Retief Goosen didn’t see who hit the shot, but they knew.

“We kind of had a feeling it was Rory,” Stricker said. “Players get in those kind of grooves or those kind of rolls where they start to make everything.”

All day long, Stricker, Toms and Goosen heard the roars behind them. They didn’t have to see the leaderboards to know McIlroy was mounting a special run.

“Every time we turned around, he was 320 yards down the middle,” Toms said. “We knew how good he was playing. We talked about it a number of times during the round, about what he was shooting, what a good score it was for a U.S. Open. I mean, I’d be happy to be at even par and he got himself to 13 under.”

With a birdie at the 17th, McIlroy reached 13 under, a magical number nobody had ever reached in a U.S. Open.

“I put myself in great position going into the weekend,” McIlroy said. “But I know more than anyone else what can happen. So I’ve got to stay really focused and try and finish this thing off.”

Nobody’s giving McIlroy anything despite his stellar ball striking.

“There’s a long ways to go,” said Stricker, who trails McIlroy by 13 shots. “He’s got to come back. The way he’s playing now, it doesn’t seem like he’ll do that, but you’ve just got to keep fighting and see what happens. But it’s pretty incredible what he’s done.”

U.S. Open history has witnessed miraculous comebacks before. Lou Graham was 11 shots down after 36 holes and came back to win at Medinah in 1975. Arnold Palmer was seven back in the final round when he won at Cherry Hills in 1960.

It’s that double bogey that provides the field a ray of hope. After driving into the left rough, McIlroy tried to reach the 18th with a 7-iron but hooked it into the water.

It’s all about closing now and McIlroy will tell you that’s about more than skill. He learned that in his Augusta National collapse.

While McIlroy’s winning over a legion of new fans with his good-natured temperament, he’s trying to cultivate a cold heart between the ropes.

Whether McIlroy’s found the attitude he needs to complement his ball striking prowess may determine whether this is a spectacularly memorable or forgettable weekend for the Ulsterman.