Feng in spotlight as LPGA plays in China 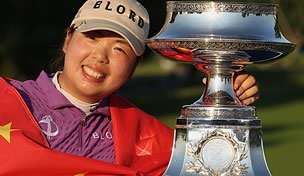 Someday, perhaps during an Olympics, we might be talking about “Shanshan’s kids.”

We might be talking about a talented wave of young Chinese women golfers the way we talk about “Se Ri’s kids” and how Pak inspired a wave of new South Korean champions.

If we are, though, we aren’t likely to hear any of them tell the story of how they stayed up into the wee hours of the morning in 2012 to see Shanshan Feng win the Wegmans LPGA Championship to become the first man or woman from mainland China to win a major championship. That’s because the Chinese media barely noticed at the time that Feng won. Her victory wasn’t celebrated in national TV highlights. She didn’t make front pages with her breakthrough, or even the front of sports sections the way Li Na did when she won the French Open in 2011 to become the first Asian to win a Grand Slam event in tennis.

Even today, Feng, 24, can walk the crowded streets or stores of her hometown, Guangzhou, without being recognized.

“Golf isn’t very popular in China yet,” Feng told GolfChannel.com in a telephone interview. “Not many people could watch the tournament when I won and know how huge it was to win a major. I can still go wherever I want, do what I want, without being recognized on the streets back home.”

Golf’s new frontier is opening its door to the world’s best in women’s golf.

China hosts the new Reignwood LPGA Classic, set to begin Thursday at the Pine Valley Golf Club in Beijing as the first of five tournaments in the tour’s fall Asian swing.

No. 1 Inbee Park is among seven of the top 10 in the Rolex Rankings in the field of 81 players. So is No. 3 Stacy Lewis, but they aren’t the lead stories going into this event.

This is “Jenny’s” week. That’s what Feng’s American friends call her. This is homecoming week for China’s premier player.

The Reignwood LPGA Classic is getting the kind of Chinese national TV attention never seen before in women’s golf. CCTV5 is televising the tournament live. That’s a first for women’s golf on that nation’s equivalent of ESPN.

“I’m excited, but I do feel a little bit of pressure,” Feng said. “I know everybody will be looking at me to see how I do, but I’m really looking forward to this.”

Feng will get more national network TV time this week than she has ever received in her homeland.

“Having the LPGA live on CCTV5 is huge for China, a great chance to show the Chinese people how great women’s golf is,” Feng said. “This is a chance to put golf on the same level as tennis and diving and other sports. I hope I can do something to make golf more popular in China.”

Feng grew up in Guangzhou, 1,300 miles south of Beijing, but she has played the Pine Valley Golf Club before. She was 11 when she played in a Chinese women’s professional event there.

Her parents are flying with her to Beijing to watch the tournament. Typically, they make one trip to see her play one or two LPGA events a year.

“My parents are very excited,” Feng said. “Every day, my mom is out singing songs in the street.”

Feng is ranked No. 9 in the world. This event will feature 18 other Chinese players, many of them from the China LPGA Tour, but Feng is clearly the brightest star in the country’s women’s golf lineup. The next highest ranked Chinese player is Xi Yu Lin, who is No. 231 in the world. It was notable that Reignwood, the title sponsor to this week’s tournament, announced on Wednesday that it was signing Feng to an endorsement deal.

“This has been a dream of Jenny’s for so long,” said Gary Gilchrist, Feng’s coach. “I think her whole life has been focused on just playing golf, and trying to get where she needs to be, but now that she is playing the LPGA tour, this tournament means a hell of a lot more.”

Feng’s rise as a pro has come with Gilchrist at her side. She was 17 when Gilchrist heard about her from his Asian connections. He offered her a full scholarship to the International Junior Golf Academy, where he was the director back then. He trusted his contacts so thoroughly, he made the scholarship offer without ever having seen her play.

Feng grew so close to Gilchrist, she followed him a year later when he left the academy and struck out on his own. When she was 18, Feng signed up for LPGA Q-School with Gilchrist on her bag as caddie. She squeezed through second stage and then went on to win her tour card.

“She had so much courage coming over when she was 17, not being able to speak much English,” Gilchrist said. “She’s had her battles and her struggles coming up.”

Feng came up the junior and pro ranks in the shadow of Yani Tseng, Taiwan’s star.

“She was always compared to Yani,” Gilchrist said. “It’s just phenomenal to see what Jenny has done, watching her battle through all of those challenges to become a top-10 player in the world. It’s fantastic, but she’s still never received the attention she deserves in her home country. I don’t think they really realize what she’s accomplished, but I think, in the near future, they will recognize what she’s done in the game of golf for her country.”

Someday soon, China may be talking about “Shanshan’s kids” as a tribute to the path Feng is blazing in women’s golf in that country.