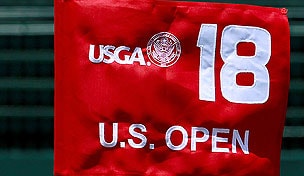 The 18th hole at Congressional Country Club is as beautiful as it is daunting.

Standing in the fairway at the top of the hill, players marvel at the vista that opens to them as they look down at the green, at the spectacular stage built around the U.S. Open’s finishing hole.

They do this while swallowing hard, because this final full shot will substantially challenge their skill and nerve in trying to close out a victory in the final round.

It’s a gorgeous setting, with the hillside forming a natural amphitheater around a long, narrow green that juts out into a pond. There’s water behind, left and right of the green, with the majestic clubhouse as a backdrop.

“It’s everything you expect of a finishing hole,” Golf Channel’s Brandel Chamblee said taking in the vista during Tuesday’s practice rounds. “It’s also as mean a hole as you can get.”

The 18th hole is 523 yards of wonder and woe, a par 4 requiring two strong shots to avoid trouble.

“You’ve got to hit a good drive first, and then you look down and you see nothing but water,” Jeff Overton said. “It’s going to make for a phenomenal finish, with the water, with the clubhouse in the background. It’s pretty neat. I’m looking forward to Sunday and how this pans out.”

This hole wasn’t technically the finishing hole the last time the U.S. Open was staged at Congressional in 1997, but it’s where the tournament was ultimately won and lost.

Colin Montgomerie’s bid to win ended here back when the hole was played as the 17th. Tied with Ernie Els for the lead on Sunday, Montgomerie fussed over a 5-footer while wary of the distractions at the nearby 18th, now the 10th hole. He missed the putt.

Tom Lehman’s chances ended here, too. He was a shot down, 189 yards away from a back pin with a 7-iron in his hand and an uneven lie. He hit his approach slightly fat and watched his ball draw too hard left and run into the pond.

Els made par and went on to win.

Nobody’s won the U.S. Open with a birdie at the final hole since Bobby Jones won at Scioto in 1926.

“And I don’t think you’re going to see that happen here this week,” Chamblee said.

Phil Mickelson got a taste of the challenge in Tuesday’s practice round. Teamed with Overton in a match against Dustin Johnson and Hunter Mahan, Mickelson was over what appeared to be a 7-iron, needing to make birdie with the pin at the back of the green, in one of its most treacherous placements. His team was 1 down in their money match.

Mickelson’s towering shot slammed into the bank on the left side of the green, kicked backward and trickled down into the water.

Still, Mickelson walked away admiring the challenge the hole presented.

“No. 18, to me, is the epitome of a great golf hole,” Mickelson said. “The reason I say that, is everybody can play it. If you miss the fairway, it’s downhill, with an opening in front. You can still chase the ball down there.

“If you’re an average guy, a high-handicapper, you don’t have to have a forced carry to an elevated green to get the ball stopped . . . But if you get a little greedy trying to make a birdie, there’s water short left as well as long. There’s that challenge for a good player to make birdie, but yet it’s very playable.

“It’s just a very well thought-out, well-designed golf hole; I think one of the best that we play.”

Congressional’s Blue Course was originally designed by Devereux Emmet and opened in 1924. It’s been renovated a number of times, most recently by Rees Jones. The hole will play 40 yards longer than it did in ‘97, when Els won the U.S. Open here.

Hunter Mahan said he hit sand wedge into the 18th when he shot 62 at the AT&T National in 2009. He hit 5-iron into the green in Tuesday’s practice round.