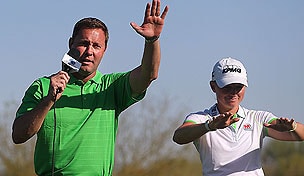 Getty Images
“As we anticipated, some of the reaction revolves around the feeling that somehow this is a political exercise, and it is not that in any way, shape or form. It is fundamentally a sponsorship issue. We are a conservative organization. We value dollars for our players. We have a strong sense of fiduciary responsibility, so we make decisions that are in the best interest of our players, short-term and long-term.” – on deciding to move a WGC event from Trump Doral to Mexico City.  -

PHOENIX – The JTBC Founders Cup is old for its age.

In the best way, that is.

It radiates with memories, like a historic event that has been around since the dawn of the LPGA.

This is just the fourth year the Founders Cup will have been played, but it feels so much older because it reaches back so far for its meaning. It reaches all the way back to 1950, when the LPGA was formed. The beauty of this event is that it was built to celebrate the tour’s past, honoring its 13 founders and its pioneers, while also promoting the future of women’s golf. LPGA-USGA Girls’ Golf is the charity beneficiary.

Hall of Famer Kathy Whitworth, winner of a record 88 LPGA titles, is a tournament honoree this year. So is Renee Powell, the second black woman to play the tour, having made her start as the civil rights struggle raged across the land.

The Founders Cup is quickly evolving as the most important women’s tournament outside the majors.

“This has become a marquee event on our schedule,” says Heather Daly-Donofrio, the LPGA’s senior vice president of Tour Operations.

“It has become one of the best stops on tour,” fourth-year LPGA pro Gerina Piller said.

All the tour’s stars show up to play the Founders Cup. It boasts the strongest field this season. The top 12 players in the Rolex world rankings will tee it up together this week. No. 1 Inbee Park, No. 2 Suzann Pettersen and No. 3 Stacy Lewis lead the field at J.W. Marriott’s Wildfire Golf Club.

The list of past Founders Cup champs isn’t very long yet, but the quality of the winners speaks volumes about the nature of the event. Hall of Famer Karrie Webb won the inaugural competition in 2011, with then world No. 1 Yani Tseng winning in 2012 and with Lewis winning last year to seize the No. 1 ranking from Tseng.

“The story of this event is remarkable,” Daly-Donofrio said. “We started, basically, with players playing for free, playing for charities. Who else in professional sports would do that? And we’ve built this up to where this tournament is going to be around for a very long time.”

The remarkable story is in the vision LPGA commissioner Mike Whan showed creating the event. It’s also in the risk he took selling his bold idea to his membership. He basically asked his players to play for free that first year, with the entire purse going to charity. The idea was to “pay it forward” to women’s golf while honoring its past.

It seemed like the right idea at the wrong time.

Initially, there was some backlash.

Whan proposed the new event with LPGA pros hurting, with fewer opportunities to play in a shrinking schedule. The tour was down to a paltry 23 events in ’11. There were players who questioned Whan’s Founders Cup plan, not necessarily over playing for free, but over how the charity payoff and “mock purse” were structured.

Whan listened to his players, and he tinkered with his idea, expanding charity opportunities beyond Girls’ Golf to personal player charities.

And Whan pulled it off. He got his players to compete with all the prize money going to charity.

The generosity, the sacrificial nature of the LPGA pros who competed, made a large impression on RR Donnelley, the title sponsor of that first event. In the second year of the competition, the company stepped up, funding not only the charity, but also a real purse.

It was a testament to Whan and his vision of what the tour ought to be. He envisioned his players channeling the spirit of the founders. He envisioned them trying to leave the tour better than they found it.

“When we all first heard about it, it was kind of a shock,” Lewis said. “It was kind of like, `Are you serious?’ We didn’t know if he was actually serious. But I think once people got the concept, we understood.”

Christina Kim said channeling the spirit of the founders was a wonderful concept.

“I am big on never forgetting where you came from,” Kim said. “The founders built this tour from nothing to where now we get to play with logos plastered all over us and with endorsement deals. They didn’t play for much back when they were starting this tour. They were playing for the love of the game. I really felt like some people forgot about that.”

Daly-Donofrio said the founders’ spirit has become a governing principle under Whan.

“We wouldn’t be where we are today without the 13 founders,” Daly-Donofrio said. “It’s something we talk about at the LPGA on a daily basis, acting like a founder.”

Webb was on the LPGA board of directors when Whan proposed the Founders Cup concept.

“It was definitely bold and risky,” Webb said.

Webb liked the idea, but she didn’t know if a title sponsor would go for it. Now, she believes channeling the founders’ spirit that first year made all the difference in the world with corporations paying attention. The LPGA’s schedule has grown from 23 events to 32 events since the Founders Cup was created.

“Could that be a reason we’ve had such a big turnaround?” Webb said. “Maybe people took notice that we were prepared to do that at a time when maybe we shouldn’t have been prepared to do that, and maybe the positive feedback it got has helped us.”

Webb also points to the growth of LPGA-USGA Girls’ Golf since it became the beneficiary of the Founders Cup. Once again this year, $500,000 from tournament proceeds will go to the cause. The Girls’ Golf program has grown six-fold since the Founders Cup was founded, from 5,000 members in 2011 to 30,000 this year.

Though there were title sponsor questions before JTBC stepped in earlier this year, Lewis believes the Founders Cup is here to stay. She gave $50,000 of her winnings here last year to LPGA-USGA Girls’ Golf.

“We’re going to keep this tournament going whether we have a sponsor or not,” Lewis said.