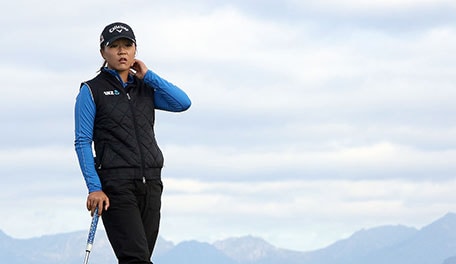 It sounds like it springs from such a sweet reservoir of spirit.

Her swing coach, David Leadbetter, loves hearing it, because he knows there’s a certain joy that is really the essence of her game. Yes, there is undoubtedly a dutiful component in Ko’s game, the good daughter wanting to please highly committed parents, a common dynamic in the culture of not just elite South Korean-born players, but elite Americans as well. But it’s the sheer joy of playing well that fuels her epic runs.

After a rough spell in the spring, where she said the game was beginning to feel too much like a job, Ko says she’s beginning to make fun a priority in her game again.

With a 6-under-par 66 Thursday in the first round of the Ricoh Women’s British Open, Ko had a lot to smile about. She’s one shot off the lead at Trump Turnberry.

It was her best round in a major championship.

“I tried to have fun out there,” Ko said.

That’s the mantra Ko’s taking to the first tee these days, an idea as helpful to her as any swing thought.  She talks as if fun should be the 15th club in her bag.

“I think having fun is important,” Ko said at the U.S. Women’s Open. “That’s what I always say, because that’s the most important thing.”

Ko opened up after tying for 12th at the U.S. Women’s Open, saying she felt as if a recent run of less than inspired play was due to feeling homesick and to feeling as if “I was kind of out there because I was a tour golfer and needed to be out there.”

Playing the Scottish Ladies Open last week, Ko said she had a blast in the pro-am format with her celebrity partners there. She took that momentum with her this week.

“It’s beautiful out here, especially the ninth and 10th holes, all along the water,” Ko said after a round of seven birdies and one bogey. “I would love to be a photographer and take a couple photos.”

With pressure ratcheting up on Ko this year to win her first major championship, the majors haven’t been a lot of fun for her. She went to the ANA Inspiration reading how she had five attempts this year to surpass Morgan Pressel as the youngest winner of a major championship. Because, you know, she’s breaking all the young phenom records for winning, so that ought also belong to her, right?

Ko ended up tying for 51st at the ANA, her worst finish in a major. In her next start in a major, she missed the cut at the KPMG PGA Championship, her first MC ever in an LPGA event.

With that final-round 68 at the U.S. Women’s Open, Ko said she felt as if she were coming out of her little funk of playing too dutifully.

Jason Hamilton, her caddie, sees it.

“She has pressure from certain places,” said Jason Hamilton, Ko’s caddie. “If those aren’t weighing too heavily on her, she can just be herself.”

Ko has won 11 times worldwide already, but she doesn’t feel a burning need to win and break Pressel’s record as youngest major champion. She has, by the way, two more chances to do so. There’s this week and the Evian Championship.

“There have been expectations,” Leadbetter said. “Everyone back home in New Zealand wants to know, `When’s she going to win a major?' That comes up every time a reporter or somebody from New Zealand calls me. I get asked it constantly. I keep reminding them she’s only at the start of her career. She’s still on a learning curve. People think she should be there already because of this meteoric rise, but she’s still learning things, still finding things out about herself, still learning about pressure and how to handle it. She’s learning to handle everybody’s expectations.”

That includes her father, Gil Hong Ko, who closely oversees Lydia’s game when she’s home in New Zealand but typically leaves those duties to Lydia’s mother, Tina, when Lydia’s on the road. Gil Hong is on the road more now, too. He was at the U.S. Women’s Open, and he is here this week.

“I just try and not think about it,” said Ko, who is now No. 2 in the world behind Inbee Park. “My goal is to hopefully have one major win in my career. I’ve been saying it doesn’t need to be now.

“To see some of the headlines, you kind of don’t know what to think about it. I try and not think about it, because at the end of the day, we’re all trying to play our best out here. That’s all we can do.”

That seemed to be Ko’s way of saying we should all chill out. It’s a tough game, and she’s doing her best.