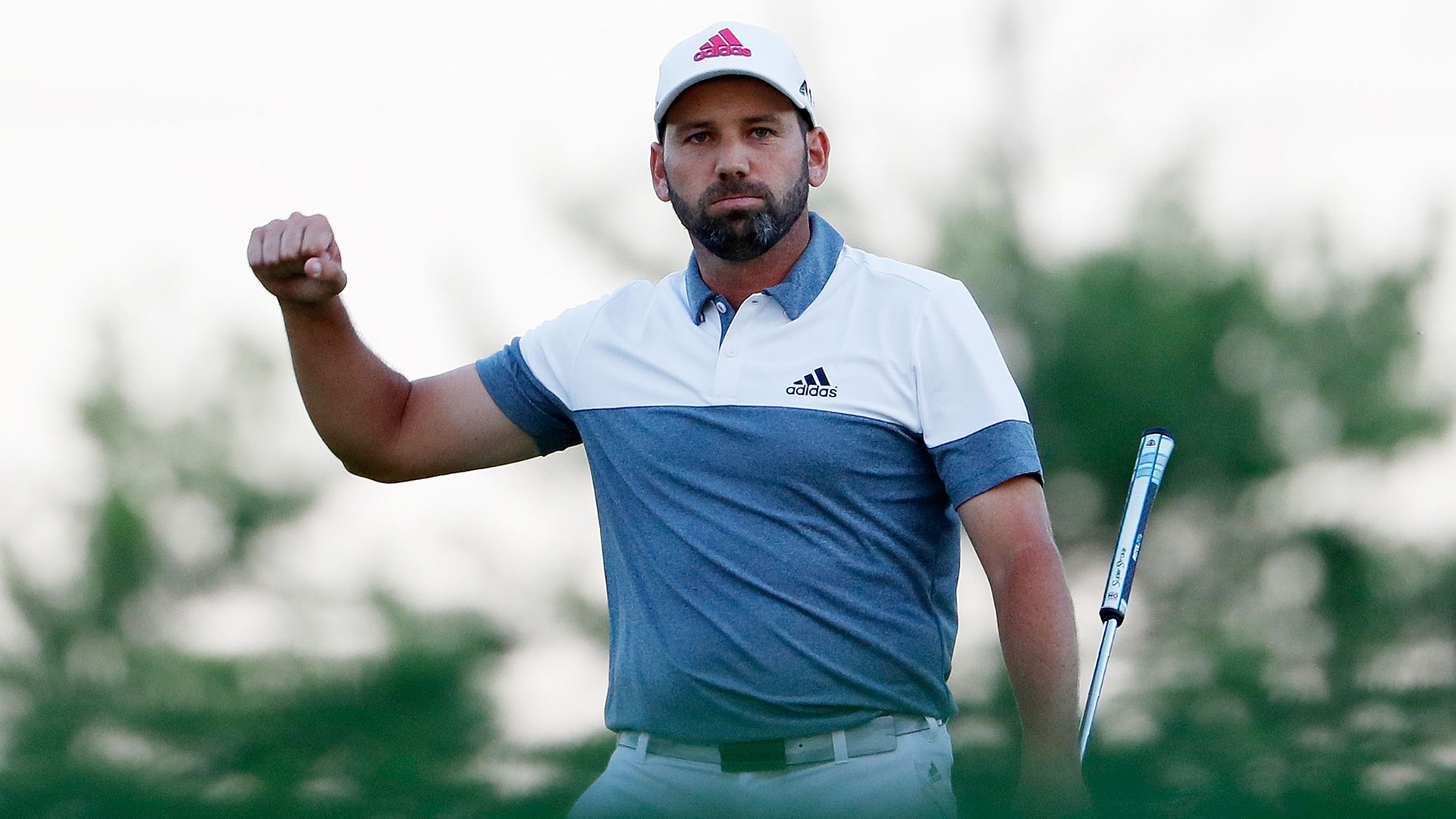 Really, if he’s finally going to break through to win his first major championship, it isn’t going to be in a U.S. Open ... is it?

Those golf gods Garcia once famously complained about will surely send frogs, locusts and fiery hail for him to play through if he has a chance come Sunday ... right?

Yet there he was Friday, gamely fighting through a long, tough day of more holes than anyone should care to play on this “ugly, old brute.” Garcia did more than hang in there in a grueling 36-hole marathon. He got into contention showing off his formidable arsenal of ball-striking skills, and at the very end, his underappreciated scrambling skills.

From 165 yards out at his last hole of the day, Garcia got up and down for par.

He holed a 51-foot putt to ignite a roar around the clubhouse.

Beaming, with his putter thrust skyward, Garcia left Oakmont with hope that maybe something magical awaits this weekend.

“This week, my head has been good,” Garcia said. “Even though I went through a couple of stretches where I didn't hit the ball that great, I stayed with it. I think my short game was really good. I chipped well. I putted well. So that was important. And I'm going to need more of that throughout the weekend.

“It’s definitely the toughest golf course I’ve ever played. There’s no doubt about that.”

With Thursday’s weather suspensions, Garcia was among those players sentenced Friday to a double dose of Oakmont, and he did more than survive. He thrived.

In his first 18-hole trek, Garcia opened with a 2-under-par 68, equaling his lowest opening round in his 17 U.S. Open appearances. In his second trek, he posted an even par 70.

“We know how difficult the U.S. Open is, and here at Oakmont, it’s even tougher,” Garcia said. “Physically, at the end, I could feel my legs tightening up a little bit. But we're so happy we got it done. We don't have to come back tomorrow until the afternoon. We can rest a little bit, take a nice, hot bath and get ready for tomorrow.”

Garcia, 36, fired at one flagstick after another through Friday, giving himself one birdie chance after another. And while Garcia couldn’t convert as many as he would have liked, he was relentless, attacking on a course where you aren’t supposed to be able to attack.

“I'm very happy to finish at 2 under,” Garcia said. “I didn't play that great this afternoon, but I thought I scrambled nicely and I made a couple big putts when I needed to.”

Garcia couldn’t make a larger statement about what he’s still capable of than to win at Oakmont, maybe the most complete test the U.S. Open offers. There’s no faking it around here. You have to have every facet of your game working to win this week and Garcia’s on his game through two rounds.

By winning here, Garcia couldn’t make a better statement of far he has come as a player and how hard he has worked to overcome the flaws that have held him back on the game’s major championship stages.

Garcia is 0 for 70 in majors with four runner-up finishes.

Even coming off a victory at the AT&T Byron Nelson in his last start, Garcia wasn’t a premium pick to win at Oakmont. Why? There is his putting and how these wickedly quick greens demand a dependable stroke. Mostly, though, there is his head and heart.

There’s no getting around why Garcia would shock a lot of pundits winning here.

Oakmont demands a larger dose of patience than just about any other U.S. Open venue. It requires unwavering belief and a certain resolute attitude.

And these haven’t been Garcia’s strengths in majors.

Jordan Spieth basically said it takes twice the patience to win the U.S. Open as it does other events.

“You have to have the patience for two rounds, each round,” Spieth said at week’s start. “It’s no more relevant than at a U.S. Open.”

Jason Day said it takes a certain frame of mind to win majors.

“You have to come in to major championships and your attitude has to be on point,” Day said. “You have to have a good attitude regardless of what the situation is.”

We’ve been here before going into weekends with Garcia, and we’ve seen them end with Garcia beating himself up.

We’ve heard him complain the golf gods are against him. We’ve heard him in vulnerable moments thinking out loud about how maybe he doesn’t have what it takes to win majors, how maybe he should just play for second place. He has said those things in frustration, in heated moments in the wake of some stinging defeats, but it hangs there now over every chance he gives himself, including this one at Oakmont.

And that’s probably why Garcia made a point to talk about how his head was in such a good place over Friday’s long haul. In the past, we’ve heard Garcia almost reluctant to make too much of a fast start in majors. Not Friday. He was glowing. He was excited.

After a bad drive at the ninth, his last hole, Garcia found himself in trouble, in deep grass in a gulch. He hacked out to 165 yards, then pulled his approach left on the green, 51 feet from the hole. There was no resignation there, no sense he was blowing all the good things he did this day. There was just joy after burying the putt.

Garcia is a little bit like golf’s version of Sisyphus in Greek mythology.

Sisyphus was the king the gods punished by compelling to roll a boulder up a hill, a damned task in that he spends eternity trying over and over again to roll the boulder to the top, only to see it roll back down without ever reaching the peak.

For Garcia, Oakmont’s a daunting hill to climb, but a glorious one if he reaches his peak.