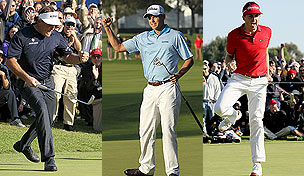 Bill Haas is Mr. Big Shot here in the shadow of Tinseltown, if only for one wild, wacky and wonderful afternoon at Riviera.

First, Haas wins the $10 million FedEx Cup jackpot with his great escape from the water at the end of the Tour Championship last September. Now this. Now Sunday’s 43-foot birdie putt to slay the wickedest little hole in golf and win a playoff at Northern Trust Open. Now this clutch finish to upset the overwhelming crowd favorite, Phil Mickelson, and Mickelson’s surprisingly popular sidekick, Keegan Bradley.

“To beat guys like Keegan and Phil, guys of their caliber, it’s amazing and something I’ll never forget,” Haas said.

Does golf end any more dramatically than it did Sunday? If you didn’t like that finish, you don’t like golf.

Haas won at the second playoff hole, at No. 10, a wicked, wicked little hole, maybe the wickedest little par 4 in golf. He won after enduring a nerve-wracking wait on the practice range, a brutal pause on his adrenalin button to see if either Mickelson or Bradley would birdie the 18th hole to force a playoff.

The first roar told Haas the game was still on. A second should have jarred him, rattled him, but it didn’t.

At the foot of the historic Riviera clubhouse, in a gorgeous little natural amphitheater around the 18th, Mickelson and Bradley scripted one of the most memorable finishes in the 10 decades this event has been played.

First, Mickelson ignited a roar of giddy delight, rolling in a 27-foot birdie. After celebrating with a roundhouse punch, and skipping over Bradley’s line to retrieve his ball, Mickelson whispered something to Bradley, his pal.

“Join me,” Mickelson told him.

Bradley did, rolling in his 13-foot birdie putt to make all those fans erupt yet again.

“Even though I didn’t win the tournament, to make that putt on the last hole, one of the toughest holes on the PGA Tour, is really awesome,” Bradley said.

Down on the practice range, nobody would have blamed Haas if he waved a white flag, but he didn’t.

Before the putts dropped, Haas turned to his brother and caddie, Jay Haas Jr.

“No matter what happens from here on, this is pretty cool,” Bill told Jay Jr. “We’re on the range warming up to maybe go into a playoff.  We're doing a lot of good things just to be in this situation.”

Haas said he prepared mentally for a playoff.

“Secretly, I was hoping they didn't [make the putts],” Haas said. “But I expected them to make it.”

Haas wasn’t the favorite, not among the Southern California galleries who rooted hard for Mickelson all day, and almost as hard for Bradley. They’ve both won major championships. Though Haas, 29, has now won four times in less than three seasons, he isn’t in that major championship class. Not yet, anyway.

“I don't say this in a negative way, but everybody was cheering for Phil,” Haas said. “He just won this last week. He’s the man. If I'm at home, I'm cheering for Phil. Everybody was saying, `Go Phil, go Phil.’ Keegan has a big fan base. I think he was easily more popular than I was in that group. I'm not saying fans did anything wrong. I just was somewhat under the radar.”

At the second playoff hole, the 315-yard par-4 10th, Mickelson and Bradley sprayed tee shots right and short of the green. Haas blew a driver left of the green, in the rough but at a better angle to attack that back-left pin.

Haas walked to his ball remembering how his dramatic blast to escape from the water won him the Tour Championship and FedEx Cup jackpot late last summer.

Even from a decent angle, Haas couldn’t pitch at the pin. He pitched 43 feet right of the pin and was happy just to keep the ball on the green there.

“I never expected to make a 40-footer, especially in that situation,” Haas said. “That was a little bit of luck involved, but I felt like I put a good roll on it.”

When Bradley missed his birdie chance, and Mickelson failed to get up and down from a greenside bunker, Haas put his name on the trophy with his stunning birdie. That’s Bill “Mr. Big Shot” Haas.